Atlanta, GA: Berkmar High School in Lilburn resonated with laughter on May 24 with well known poets from India enthralling an audience of over 350 of all ages. The sammelan was organized locally by International Hindi Association, a non-profit organization established in 1980, to promote Hindi among kids of Indian origin.

Consul Anil Kumar from the Consulate General of India in Atlanta, prominent community members and media representatives attended this program. 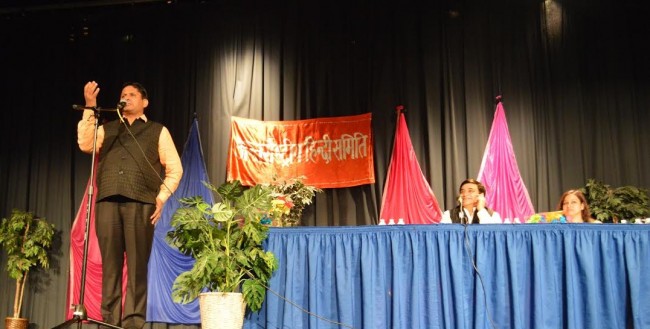 Hindi is the official language of India, the world’s second most spoken language, and spoken by almost half a billion people throughout the world.

The International Hindi Association has been trying to promote and preserve India’s culture through language and literature amongst Indians abroad. The association has been organizing Hasya Kavi-Sammelans around the US with famous Hindi poets with increasing popularity.

In Atlanta, it was a fun filled evening of humor, laughter and heartwarming recitals by three poets Arun Gemini, Ritu Goel and Ved Prakash.

Arun Gemini is one of the most popular humorists inIndia. He is known for his impeccable timing and delivery. Along with laughter, his humorous poems contain a deep and enchanting satire on day to day problems of life. As a poet of distinction, he has been felicitated by the President and Prime Minister of India.

Ved Prakash Ved is a leading Hindi satirist, and a celebrated poet of ‘Hasya Vyang’. Ved has performed in over 2500 kavi sammelans inIndiaand abroad. When he takes the podium, the auditorium is filled with continuous laughter. His poetry has a mixture of engaging humor and penetrating satire. Ved is a recipient of numerous awards,

Ritu Goel is a mass communication graduate, and a journalist by profession. She is a producer and director of numerous documentaries for the government of India and various corporations and media houses, and currently runs an advertising agency named ‘Sanskriti Creations’ and an NGO named Disha Foundation. Ritu is a poetess of human-relations and emotions who has performed in over 1000 kavisSammelans inIndiaand abroad. Ritu has been felicitated by the government ofIndiaand awarded byDelhiHindiAcademy. She is a regular on national TV and radio, and is widely published in all major Hindi newspapers and magazines.

Mustafa Ajmeri welcomed the poets with bouquets on stage. Sanjeev Agarwal, the principal organizer, welcomed the audience and poets on behalf of his entire volunteer team. 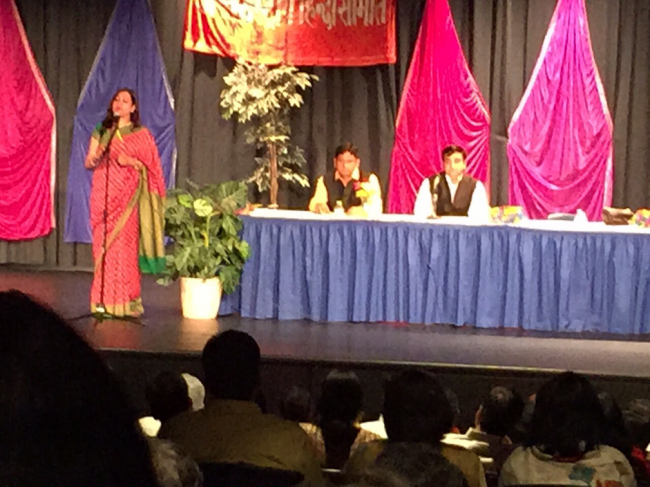 Tea and snacks were served during the break and dinner was served at the end of the program. Food was included in the $15 adult, $10 senior citizen ticket price (ages 12 and under were free entry).

A new team of volunteers organized the event in Atlanta. The community can look forward to more such sammelans in theAtlantaarea in the future, the volunteers said.

Search on for Forsyth burglary suspects