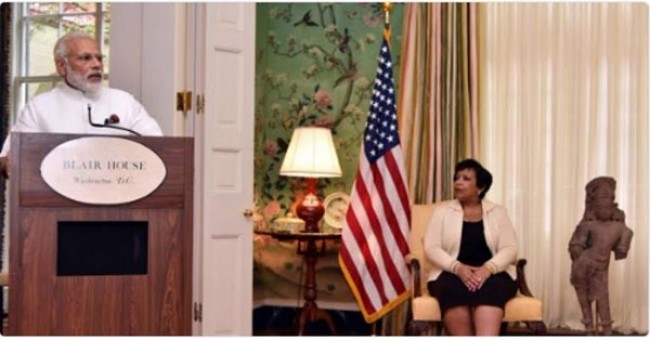 Washington, June 7 (IANS) From a bronze Ganesh to a Jain figure of Bahubali, the US has returned more than 200 pieces of rare cultural artifacts to India during the visit of Prime Minister Narendra Modi.

Modi expressed his gratitude for the return of the ancient artifacts during a ceremony on Monday night here.

“We are very grateful for government of the US and the President for returning a part of our culture. This heritage inspires us for the future,” he said.

“Usually it’s the present that brings nations together, but sometimes it’s the heritage that brings two nations closer. Over the past two years, various countries have endeavoredto return India’s stolen cultural heritage,” said Modi who arrived in the US on Monday on the fourth leg of his five-nation tour.

“My gratitude to the US government for the sensitivity shown to India’s heritage. This will evoke great respect among the people of India,” he said, according to External Affairs Ministry spokesperson Vikas Swarup’s tweets.

“There treasures are to be enjoyed by the entire world. Technology can help us catch those indulging in illicit trafficking,” he added.

Earlier, Swarup posted along with pictures of the artifacts: “From a bronze Ganesh to a Jain figure of Bahubali, here are pics of some of the returned cultural artifacts.”

During her address at ceremony of Repatriation of Cultural Property, US Attorney General Loretta E. Lynch said: “Today (Monday) we begin the process of returning more than 200 stolen cultural objects back to India.”

Earlier, Modi paid tribute to the US space scientists who lost their lives during their research in space at the Space Shuttle Columbia Memorial and also laid a wreath at Arlington Cemetery (Washington DC), the tomb of US soldiers killed during conflicts.

During his visit to Space Shuttle Columbia Memorial, Modi met NASA astronaut Sunita Williams and the family of Kalpana Chawla, Indo-American astronaut, and invited them to visit India.

He later had an interaction with thinktanks in Washington.

“Probing the minds of those who shape foreign policy. PM @narendramodi at an interaction with thinktanks in Washington,” Swarup tweeted.

Modi arrived in Washington on Monday on a three-day visit, during which he will hold talks with President Barack Obama to review bilateral ties and address a joint session of the US Congress.

This is the Prime Minister’s fourth visit to the US in the last two years.