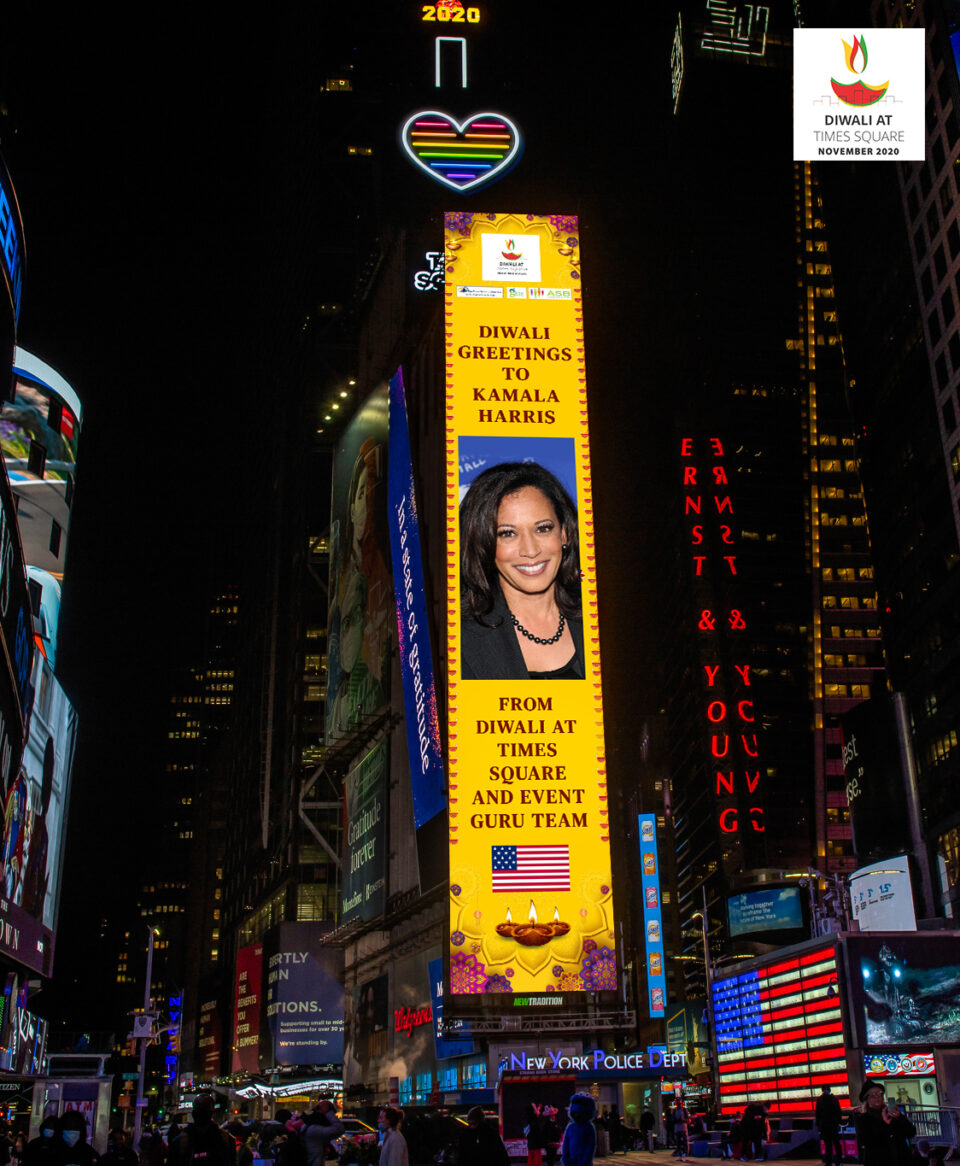 New York, NY, November 18, 2020: Even Covid-19 couldn’t put a damper on one of the biggest celebrations in New York City’s iconic Times square where on Thursday, November 12th, Diwali was celebrated with pomp and festivity albeit in a slightly different format. Diwali at Times Square, by some accounts the largest celebration outside of India, has been increasing its audience since its inception in 2013. This New York city Diwali celebration usually draws a big crowd and features a ‘Diya (lamp) Lighting’ ceremony accompanied by a New Year’s Eve style countdown featured on the tallest Times Square digital screens, followed by a host of rousing concerts. This year, though we could not gather in person, Diwali was still celebrated with as much gusto in spirit with the Digital Diya Lighting with Countdown, a live feed for global viewers and Virtual Online Colors of India and Light Up Times Square concert on Diwali at Times Square Social Media platforms featuring some renowned musicians from the USA and India.

The wholesome spirit of Diwali prevailed even more this year than in years past with the community battling the evil pandemic. As Neeta Bhasin, President of the event management company, EventGuru Inc. and the mastermind behind Diwali At Times Square Festival, said in her opening remarks before commencing the event this year on the eve of Nov. 12th, “You have witnessed a whole new version of Diwali at Times Square this year. The ongoing Pandemic has made us all realize that certain things can be felt and enjoyed even while being at home. With your support, we still managed to light up a Diya on the tallest screen in Times Square and are celebrating Diwali with viewers from not only the USA but around the world!”.

This year as well, this auspicious event was attended in-person by several dignitaries in New York including the inauguration by Mr. Randhir Jaiswal, Consul General of India, New York. Other dignitaries who joined the event were Mr. Kamal Raul, Regional Manager, Air India, Mr. V. Senthur Kumaran, Assistant Director, India Tourism, community supporters and the media. Diwali Greetings and Message from Indian Prime Minister, Mr. Narinder Modi were also shared to the world straight from the center of the universe, Times Square, NY. Congratulatory and Diwali wishes to Vice-President Elect, Kamala Harris were followed by Diwali greetings from the Consulate of India, NY, Air India, Eye Foundation of America, Celebrities and various other community organizations were proudly displayed on the tallest tower of Times Square, the tower where the December 31st New Year’s ball drop ceremony takes place.

This Diwali celebration did not stop there; the festival continued on Diwali at Times Square Social Media platforms till November 14th, the day of Diwali, including a beautiful, virtual, musical concert on November 13th titled ‘Colors of India’ – a coming together of Indian talent representing American Indians living in various parts of the USA.

Finally, on November 14th, the celebration culminated with a virtual ‘Light-Up Times Square’ concert with renowned Indian performers who have won millions of hearts with their magical voices and melodies. Padma Shri Usha Uthup, Hamsika Iyer, Merlin D’Souza, Pritha Majumder, Jankee and Sunita Bhuyan put together a special show to entertain us in this difficult time. We salute them for uplifting our spirit when we needed it the most. Now it is our turn! Diwali at Times Square is contributing 10% of the proceeds of the ‘Diya Lighting’ sponsorship to the musicians of India who are going through a difficult time due to the pandemic. It is our hope that with our contribution we can help them keep the lights on in their homes and hearts just as they helped us light up ours this Diwali.

You can now watch Diwali at Times Square special shows on the various social media handles: