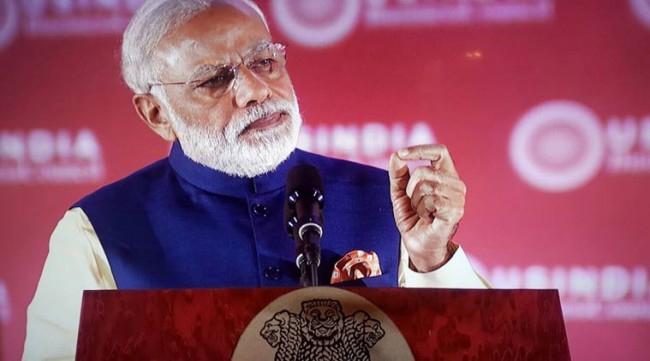 Washington, June 8 (IANS) Assuring continuity in reforms and predictable tax policies, but with a firm hand against evasion, Prime Minister Narendra Modi invited USA Inc to invest in his country to forge a win-win partnership between American innovation and Indian human resource.

Speaking at a gala hosted by the US-India Business Council here, he also called upon rich nations to open up their economies to goods and services from emerging countires like India as they seek to make world-class merchandise not just for themselves but also for the entire globe.

“India is the future human resource powerhouse of the world with a young hard-working population. In my vision, a partnership between American capital and innovation, and Indian human resource and entrepreneurship can be very powerful,” Modi said.

“I am convinced we can strengthen both our economies through such a partnership,” said the prime minister to a packed audience that included the top brass of companies like PepsiCo, Master Card, Warburg Pincus, Lockheeed Martin, Boeing, Westinghouse, Intelsat, Emerson and 8Minute Energy.

The prime minister said his government will continue to strengthen the Make in India initiative, which was intended not only for manufacturing for the domestic market or import substitution but was also about making world-class products and services for the whole globe.

“That is why, for us, improvements towards free trade are important. It is very important for us that developed countries open their markets not only to goods from countries like India but also to services. I see this as a win-win proposition for the US and for India.”

He also held out an assurance: “We will continue to make our tax policies more predictable.”

Earlier, the office bearers of US-India Business Council said their members have already invested $28 billion in India since September 2014 and that another $45 billion was in the pipeline, even by a conservative estimate.

Jeff Bezos, founder and CEO of Amazon.com, specifically said the US-based global e-commerce major had pledged another $3 billion investment in India in addition to the $2 billion that was announced in 2014 and had created over 45,000 jobs in India.

In his address, Prime Minister Modi specifically spoke about India’s defence sector and said this industry will be opened up further to domestic and overseas investment along with steps to ensure that projects do not get unduly delayed.

“I am aware that licensing policies can sometimes slow down the process of investing in IndiaÂ’s defence sector. We are exploring a simpler and more efficient project licensing approach for defence,” he said.

“In the field of nuclear energy, we are purchasing six nuclear reactors from Westinghouse, which will mark a new era in our nuclear and scientific cooperation. I was delighted when GE became one of the first companies to make a major investment in the newly liberalized railway sector.”

The prime minister said there were four key elements to his government’s policies — a sound macro-economic foundation, ensuring growth with enhanced employment, efficiency and productivity, social inclusion to benefit the poor and a frontal attack on corruption.

On corruption, he said, even the worst critics of his government cannot deny the achievement that has been made since his government took office two years ago, adding graft is an issue that acts as the main deterrent to growth for any developing economy.

“We have taken decisive steps to curb corruption,” he said, adding discretion in allocation of key resources has been replaced by auctions, people get direct cash for subsidies intended for them and senior positions are being entrusted to professionals of integrity.

“We have also launched an on-going campaign against tax evasion and black money. The poor are the greatest beneficiaries of the reduction in corruption.”