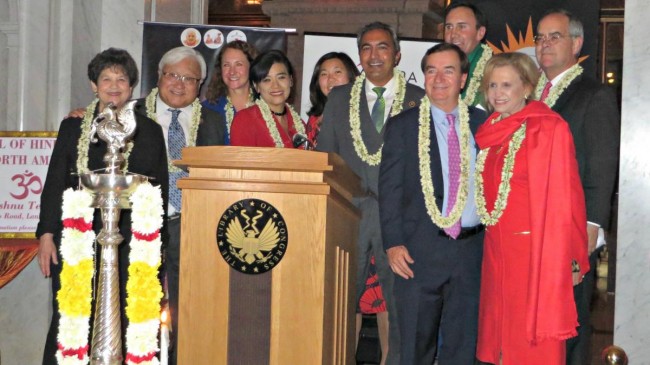 Washington, Nov 5 (IANS) More than 30 members of US Congress joined about 1,000 people at the annual Diwali event on Capitol Hill, the seat of US legislature, to celebrate the accomplishments of the Indian American diaspora.

It provides an opportunity to meet with members of Congress and other elected officials to celebrate the contributions of the South Asian community in business, technology, health care, arts, academics, and much more.

Attendees at the event in the Great Hall of the Library of Congress, included Senators Mark Warner and Tim Kaine, both Democrats, and the Republican Chairman of the House Foreign Affairs Committee Ed Royce.

Diwali is celebrated by nearly a billion people around the world and more than two million people in the US, a media release from Bera’s office noted.

“This event celebrates who we are and all our community has accomplished,” said Bera, the lone Indian American Congressman.

“Over the next decade, I look forward to making DC the hub for connecting members of the community not just from the surrounding region, but across the country to celebrate our progress and talk about the future.”

“The United States and India have been building a partnership to make both our nations safer and stronger,” Bera said.

“The Indian-American Community has been playing a key role in building needed ties between our two countries, and I congratulate the volunteers who worked to make this year’s Diwali celebration in Washington a success,” he said.

“In the coming year, I look forward to continuing to strengthen the bonds between our countries.”