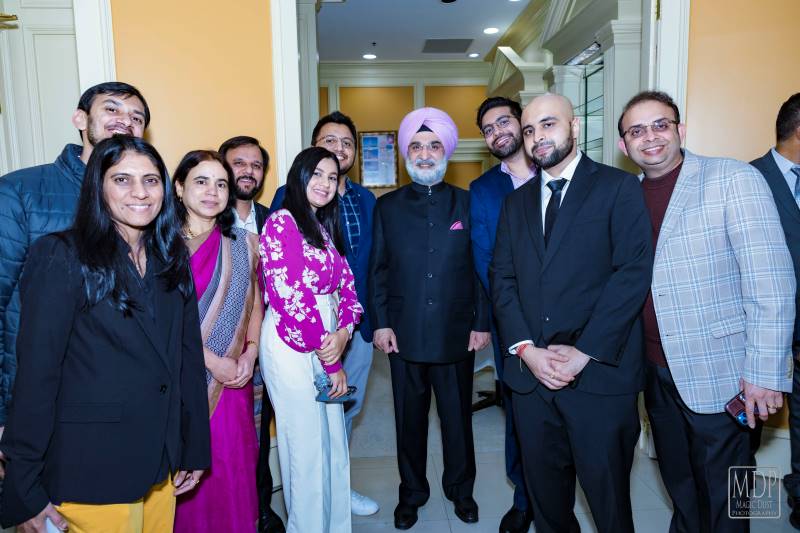 Atlanta, GA, January 20, 2023: India’s Ambassador to the US, Taranjit Singh Sandhu addressed young professionals, women entrepreneurs, thought leaders, and heads of community organizations at the Consulate General of India in Atlanta on the evening of January 16, 2023.

The event was part of Ambassador Sandhu’s packed three-day visit to Atlanta which included his participation in the Martin Luther King Jr. Day celebrations, interactions with Georgia lawmakers, and visits to Georgia Tech and the University of Georgia in Athens.

Ambassador Sandhu’s visit also included a stop to pay his respects at the Gandhi Statue (at the MLK Center National Historic Site) in Atlanta.

“It’s fascinating to celebrate Mahatma Gandhi and MLK,” he told the full house at the Consulate that had waited patiently over an hour and a half for his arrival from Athens.

The Ambassador also reminisced about his connection with the Congressional Black Caucus which went back to 1997 when he first met Congressman John Lewis. The meeting led to the establishment of a monument for Mahatma Gandhi along Massachusetts Avenue in Washington DC, he said.

Speaking about the growing US-India relations, he said there has been bipartisan support for India in the past two decades. “Even here (at an event he attended in Atlanta), we had a Republican Congressman and a Democratic Senator all speaking in one voice about India.”

To illustrate his point, Ambassador Sandhu said, President Biden and PM Modi have met at least 15 times virtually and in person. India’s Foreign Minister S. Jaishankar and US Secretary of State Antony Blinken have interacted at least 30 times. “It is reflective of the deep engagement that is happening.”

India’s defense exports with the US which was zero dollars 15 years ago, has reached $25 billion, he said. “We recently had a US ship being repaired in an Indian naval yard. Similarly, we had an Indian ship visiting a US port after a decade.”

The US and India are expanding the frontiers of their partnership to include healthcare, energy, tech, space, and education, he said.

The Ambassador spoke about NISAR, a joint Earth-observing mission between NASA and the Indian Space Research Organization (ISRO) which will help monitor climate change better. NASA and ISRO are working on heliophysics, and human space flight programs, he added.

“US India energy partnership, which was zero dollars four years ago, today stands at $20 billion. We have just announced the green hydrogen program where the US will be an important partner.”

Several in the packed audience at the Consulate were college students from Georgia Tech and other colleges in the city, a slice of the community that the Embassy has been trying to engage. “At present, we have about 200,000 Indian students in the US, and two-thirds of them are in STEM areas. But it is no longer about Indian students coming here. Many US universities want to establish campuses in India. Joint research work will add value to both sides. The young in India are not only a huge resource for India and the US, but for the global good,” he said, adding that 50% of the Indian population is below 26 years old, while many of the developed economies including powerhouses like Germany are aging today.

The National Science Foundation is collaborating with the Department of Science and Technology to support tech innovation hubs in India.

Drone technology is used by farmers to spray pesticides. “I go to California farms and tell the farmers, why don’t you share your best practices with your cousins in India. We have to break the rice and wheat cycle in states like Punjab. If we do not commercialize agriculture, we’ll go nowhere.”

Ambassador Sandhu said India has had a remarkable transformation in the past few years.

There are over 340 million internet users in rural India, and 290 million users in urban areas.

Two years ago, there were few startups in India. Now there are over 100,000 startups, and 108 of them are unicorns.

“That’s the kind of economic future we are looking at,” he said.

Speaking about the growing relations between Georgia and India, Ambassador Sandhu said 64 Indian companies were in India with over $15 million in investments. These companies are bringing value and and competitive edge. They are also creating jobs in Georgia.  Emory University’s health department is linked with several parallel institutions in India.

“You must ensure that the young are connected with India,” he said. Not only for cultural or emotional reasons, but also for economic reasons. If they are familiar with India, as industry majors invest in the country, your children will be in unique positions to be picked up by them.”

He said the Indian American community ought to emulate the Jewish community in sending groups of youngsters to India during summer or winter breaks. “Convey their plans to the Consul General, we will make sure they have adequate security there.”

Consul General Dr. Swati Kulkarni earlier introduced Ambassador Sandhu as the most experienced Indian diplomat to have ever served as Ambassador. “He knows the USA like the back of his hand,” she said.