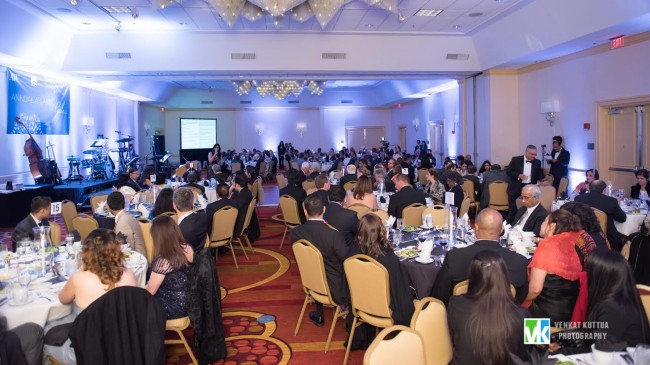 Atlanta, GA, March 28, 2015: On Saturday, March 27, the American India Foundation (AIF) hosted its inaugural Atlanta, bringing together more than 215 guests, including some of the region’s most influential philanthropists and entrepreneurs, C-level executives, luminaries, and community leaders to raise around $100,000 in support of AIF’s flagship livelihoods programs offering opportunities for economic development for the underprivileged in India: the Market Aligned Skills Training (MAST) program and Ability-Based Livelihoods Empowerment (ABLE) initiative.  The gala was organized in partnership with US Pan Asian American Chamber of Commerce (USPACC), the oldest and largest organization representing Asian American businesses in theUnited States.

AIF’s Founding Chair of the Atlanta Leadership Council, Amitabh Sharma and President of USPAACC, Neera Bahl, welcomed the audience. Veteran leader of the environmental movement, progressive social activist, and celebrated author Carl Pope was presented with the inaugural the Lillian Gordy Carter Award for Exceptional Service to India, instituted in honor of the mother of President Jimmy Carter’s legacy of medical and nursing excellence to the underprivileged, both in India as a member of the US Peace Corps in the late 1960s and to African-American communities in Georgia during the Civil Rights movement.

Jason Carter, grandson of President Carter and Georgia State Senator, commemorated the award. Carter has continued the family legacy of global service by serving in the US Peace Corps in South Africa, working on education issues in rural areas, after his graduation from Duke University.

“This occasion and the award is incredibly important to us. At the age of 68 for my great grandmother to go into the Peace Corps and her experience in India has infected the entire family.  Our family’s commitment to social change can be traced back to President Carter’s mother’s experience In India. It is an honor for us to be a part of this organization. Her journey is also a testament what one person can do. She has been the change that Gandhiji said we should be.” Carter said.

Pradeep Kashyap, Vice Chair of the Board of Directors of AIF, introduced Carl Pope.  A veteran leader in the environmental movement, Pope worked for the Sierra Club for more than thirty years, including eighteen years as its Executive Director. Under Pope, the Sierra Club helped protect nearly 10 million acres of wilderness.  During Pope’s tenure, the Sierra Club led the charge in helping to block more than 125 proposed new coal fired power plants, achieving a 40% improvement in the pollution and fuel efficiency of America’s passenger vehicles, and launching the Club’s Climate Recovery Partnership. Pope is currently serving as a Special Adviser to Michael R. Bloomberg and is also the principal advisor at Inside Straight Strategies.

Faizal Kottikollon, founder and chairman of United Arab Emirates-based KEF Company Ltd., whose renowned valve-casting brand for the oil and gas industry led to its sale to Tyco International, was honored for his Excellence in Entrepreneurship and Philanthropy.

Kottikollon is a global philanthropist, with a strong footprint in India, including a special needs school, vocational education and rehabilitation center for autistic children in Kerala through the Faizal and Shabana Foundation. The foundation is also a major contributor to Nobel Prize Laureate Rajendra Pahuair’s Light A Billion Lives campaign to introduce environmentally-friendly solar lights and power in rural villages of India, and to the Indian Community Center for Individuals with Disabilities in Dubai.

Dinesh Paliwal, Chairman, President and CEO of Harman International and one of AIF’s devoted senior supporter and one of its Board of Directors, presented the award to Kottikollon.

Dr. Sanjiv Chopra of Harvard Medical School, the younger brother of spiritual guru Deepak Chopra and like his brother a celebrated author, delivered an inspiring keynote address, in which he touched upon leadership and philanthropy based on his experiences growing up in India and in the United States in the four decades since. Dr. Chopra talked about the need to think about the joy of giving and the importance of good acts however small they are; emphasizing that this is more important than the noblest of intentions.

Another highlight of the evening was the presentation of a special Georgia House of Representatives Congressional Resolution to AIF for being the leader in development work inIndia.  It was presented by Georgia Representative Mike Glanton who remarked, “I applaud and salute the fact that you have not forgotten the communities around the world.”

AIF is revolutionizing the industry paradigm by providing equal opportunity and access to employment for persons with disabilities, based on a simple belief—it is one’s ability, not disability that defines any individual. The Ability Based Livelihoods Empowerment (ABLE) initiative trains persons with disabilities in fundamental and specialized skill-sets, and facilitates their entry into the job market through a robust advocacy platform for disability inclusion, promoting inclusive growth in India. AIF’s Market Aligned Skills Training (MAST) provides underprivileged youth with skills training and access to formal employment opportunities.

Couple sentenced in Atlanta for laundering $500,000 on behalf of India-based phone scammers