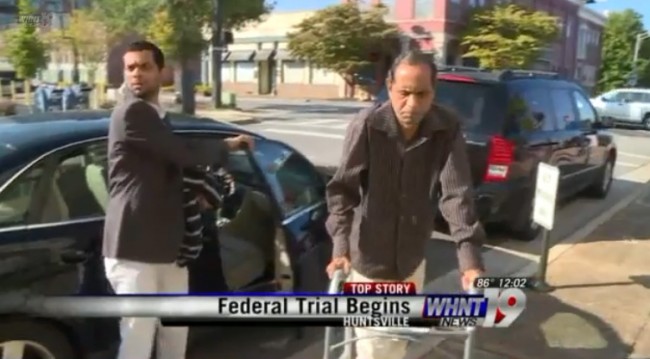 Washington, Sep 2 (IANS) The trial of a former Alabama police officer who slammed down an Indian grandfather walking in his son’s neighborhood in February has begun with the first day spent in selection of the jury.

Eric Parker, 26, is accused of using excessive force against an unarmed Sureshbhai Patel and charged with violating his civil rights.

Patel, 57, arrived for court early, steadying himself on a walker as he slowly moved down the sidewalk outside the federal courthouse in Huntsville before the trial began Tuesday, according to local Al.com.

“He’s reached the max, in my opinion,” said Chirag Patel of his father’s recovery. He said his father has regained some independence. “He is able to get around and take care of himself.”

But Chirag Patel, an engineer in Madison, said his father has lost the ability to grip with his left hand and has learned to move around by dragging his left leg.

On Feb 6, on a cold Friday morning in a quiet suburban lane in Madison, Parker and a trainee responded to a non-emergency call about a “skinny black guy” walking around near the homes.

Parker and the trainee stopped and detained Patel, who was taking a morning walk in front of his son’s home.

Patel spoke no English and had arrived days earlier from India to help care for his new grandson.

Dash cam footage shows Parker and another policeman approach Patel. Parker, while holding the older man’s arms behind his back, is seen slamming Patel face-first into the ground and falling on top of him.

He required emergency surgery to repair damage to his spine and remains partially paralysed.

Parker, who was subsequently fired by the Madison Police Department, faces up to 10 years in prison on the federal charge if convicted.

He also faces a misdemeanour assault charge in Limestone County, but that case has been put on hold pending the outcome of the federal trial.

Prosecutors for the federal government and the defence attorney for police officer Eric Parker spent all of Tuesday instructing, organising and questioning 55 potential jurors.

In the end, only four were dismissed, including one man who had difficulty hearing.

The rest will return at 10 a.m. and opening statements could take place soon after on Wednesday.