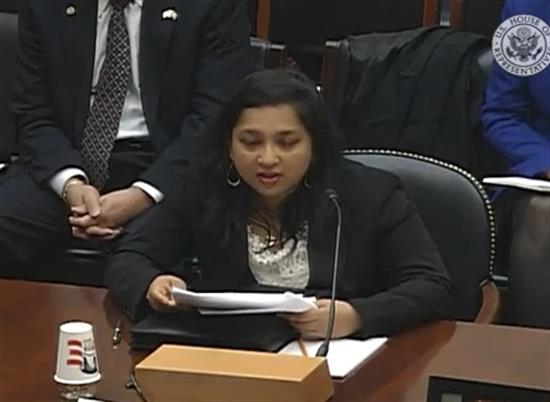 Washington, March 29 (IANS) Recounting her heartrending tale of woe, an Indian-American mother turned to US lawmakers for help to get back her two children allegedly abducted to India by her ex-husband six years ago.

“Help me to make my voice heard in a way that shall be meaningful and allow me to be reunited with my children who need the love and nurturing of their mother,” said Bindu Philips testifying before a House panel with a few other parents of abducted children.

A subcommittee of the House Foreign Affairs committee was reviewing Obama Administration’s implementation of the Goldman Act to Return abducted American Children at a hearing last week.

Besides lobbying on the Capitol Hill to make their case, about 25 parents of abducted children representing five organizations also held a candlelight vigil before the White House.

“Tragically, my world and that of my innocent children, was violently disrupted by my ex-husband, Sunil Jacob in December of 2008,” said Philips, a mother of twin boys, Albert Philip Jacob and Alfred William Jacob, both 14 now.

Accusing Jacob of orchestrating the kidnapping of the children during a vacation to India, she told the panel: “On reaching India I was not only physically and emotionally abused by my ex-husband but also by his parents.”

She was not only “very cruelly separated from my children” but also not allowed to see or communicate with them after her husband transferred them to another school with strict orders not to let the mother or any of the maternal relatives see them.

“Unable to communicate with the children,” Philips returned to the US in April, 2009 to find their residence in Plainsboro, New Jersey, stripped of everything by her ex-husband’s friends “leaving me with not even a single photograph of my children.”

In Dec 2009, the Superior Court Family Part in New Jersey, “not only granted me sole custody of the children” but also “demanded their immediate return to the US,” said Philips.

In turn, her ex-husband filed for custody of the children in Indian Courts after the US child custody was filed, Philips alleged. The case is currently pending in the Supreme Court of India.

Susan Jacobs, Special Advisor for Children’s Issues at the State Department, told the panel the US was committed to finding a viable solution for resolving each and every abduction case.

It was also committed to advocate for membership in the international treaty on the issue, and to create safeguards that will minimise the occurrence of international parental child abduction, she said.