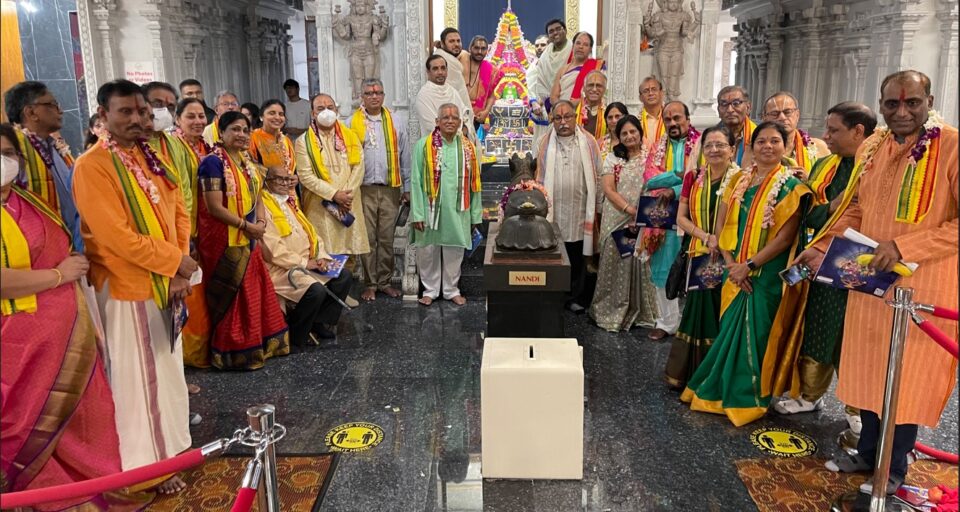 Atlanta, GA, January 20, 2023: Hindu Temple of Atlanta’s signature event “Navodaya 2023” was celebrated at ​the Hindu Temple of Atlanta on January 1 and Vaikunta Ekadasi on January 02 with great enthusiasm, fanfare, and devotion. Thousands of devotees across Georgia and nearby states thronged the Balaji and Shiva temples to receive the blessings of the divine for a prosperous and healthy 2023.

About 15,000 devotees and visitors enjoyed a joyous and spiritually suffused 20th Navodaya and Vaikunta Ekadasi festivals with day long events on both days.  All the deities at the temple were decorated with fresh flowers and Archanas (rituals) were performed all day long. There were several activities, and vendors and stores were set up. As the day progressed, more and more devotees arrived inside the two temples and after offering prayers, went around exchanging Happy New Year greetings, visiting and shopping at HTA Gift Shop and also at various booths inside the auditorium.

Children were engaged and entertained by a clown. Face, nail and palm-painting, balloon-twisting and popcorn also added to children’s fun activities.

Indian festivals and food go together. The varied menu of South Indian vegetarian splendors like spicy idly sambhar, masala dosas, tamarind or curd rice, upma, boondi laddoos, Mysore Pak, samosas, Mysore Bonda and savories lovingly prepared in the temple’s kitchen, by the staff and score of volunteers and served in the spacious banquet hall, by the cheerful and enthusiastic youth volunteers was relished by all. The banquet hall remained packed with devotees enjoying mouth-watering food.

Dr. Sarvesh Naidu, past president of the temple released the calendar/panchangam for 2023 especially prepared for Atlanta sun rise and sun set timings. The HTA calendar is known and trusted for accuracy and is used by thousands of users. The calendar is a depiction of the profiles of the HTA. The HTA meets a great need of our community in providing details of the most important festivals and days of religious significance on the Hindu calendar.

Devotees patiently waited in lines since early morning to have Balaji’s darshan through Vaikunta Dwaram. The Vaikunta Dwaram erected especially on the occasion was thrown open for devotees in the early hours of Monday.

Hindus world over believe that one who passes through this Dwaram on this Vaikunta Ekadasi day gets rid of all the sins and attains moksha. Vishnu devotees believe that ‘Vaikunta Dwaram’ or ‘the gate to the Lord’s Inner Sanctum’ is opened on this day. The Margashirsha Shukla Paksha Ekadashi in the Lunar calendar is known as a ‘Vaikunta Ekadashi.’ Special prayers, Continuous chanting of Sri Vishnu Sahasranama Parayana, Archanas and Bhagavadgita Parayana by the students of Mysore Datta Peetham are highlights of Vaikunta Ekadasi at the temple on this auspicious day. The entire temple was charged with religious ecstasy.

Prashanti Asireddy, the out going president of the temple provided a brief about recent accomplishments of HTA. She said that she was very blessed and greatly honored to be in the service of HTA as president for years 2022 and 23.

“The temple has come out of COVID and it was a tough time during which the temple has seen a drop in funds from devotees coming in. There was lot of skepticism, how we are going to pick up and run and go forward. But by the God’s grace and blessings, we came out of that and the temple is now financially sound,” she said.

“A lot of devotees are coming and we are fantastic in the one and half years. We have wonderful devotees, trustees, volunteers, priests, staff, EC members and everyone supported the temple relentlessly without any conditions.”

Thanking the temple community, Prashant Asireddy requested for continuous support and urged devotees to participate, contribute and volunteer for keeping up the tradition to make HTA great.

The incoming President Aravind Goli who took charge as president of temple talked about his goals to take forward the activities of the temple. He said the incoming Executive Committee would like to welcome the entire Indian community to the temple not only on January 1st but throughout the year to participate in all events and get the Lord’s blessings. He said HTA is on the forefront to improve Indian culture, traditions, practices and Hindu immigrants here and at the same time inculcate interest about Hindu religion in Indian children who are born and brought up here.

The Hindu Temple, an iconic landmark in Riverdale, Georgia, is well known for its spiritual, cultural, and educational services. The temple has played a sterling role in enriching religious diversity and enhancing the multi-cultural image of Georgia.