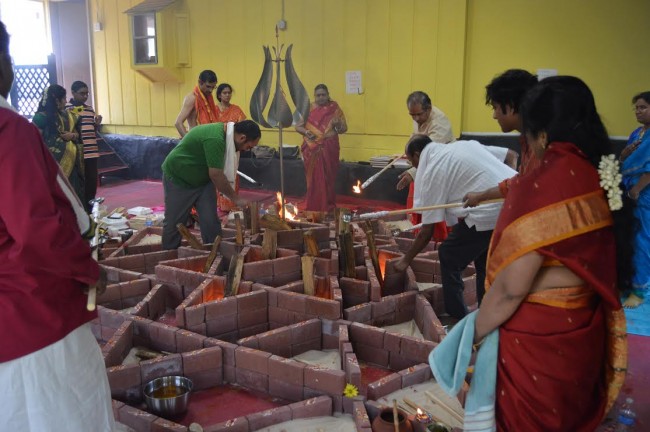 Atlanta, GA: A historic, one of a kind Sri-Chakra Rajam ceremony was held in a spacious hall, behind Sri V.R.Chaganti’s home in McDonough, Georgia on Saturday April 4, 2015. Because of lunar eclipse on that day, the homam (oblations of  homam samagri in the ritual fire accompanied by chanting of sacred Vedic manthras) commenced at 1-00 p.m. Shri Shastry Munnagala and the Saptha-Hothas (Seven couples) participated in the well-attended spiritually suffused and ritual studded ceremony.

Sri Chakra Yantra, Thanthra and Mantra have many references in our ancient texts. All agree that Sri-Chakra Rajam represents the creation of the universe. InIndia, Astadasha Peetams worship the Sri Chakra Rajam as a Yantra and many saints worship Sri Chakra Rajam with Thanthra, and praise God as Para Sakthi.

For the first time inUSA, 3 dimensional Sri Chakra Rajam Yajna Kundam was constructed and oblations made to the chanting of illuminating Veda Mantras. The 3 dimensional Sri Chakra Rajam’s Yajna Kundam that represents the method in which God’s creation took place consists of 9 main chakras, yonis or enclosures in the form of triangles that comprises of five layers that generate 43 more triangles with the arrangement of the nine triangles. Five triangles with their apex pointing east and four triangles with their peaks pointing west are arranged in such a way that has the meaning of the creation. These 9 interlocking triangles generate a total of 43 triangles (See the picture). The top layer has one triangle, the next layer has 8 triangles, the next layer has 10 triangles, the next layer also has 10 more triangles, and the last layer (bottom most layer) has 14 triangles. Bindu is placed at the center of the top triangle. It is beyond the scope of this article to write about the entire meaning of these triangles and a center point bindu (dot) that is within the top central single triangle.

The mantra of Sri Chakra Rajam is significantly called Beeja (Seed) chakra with the worship done mainly with Beeja letters (Aum (OM), I’M (I eem), Hrim (Hreem), Srim (Sreem), Klim (Kleem)). These Beeja letters were chanted carefully led by Hotha Shri Shastry Munnagala and the Saptha-Hothas (Seven couples who participated). These letters were chanted with (3-1-4) rhythm. And after every chant of the Beeja Mantra, Ved Manthras from different Sukthas were chanted by Brahma Shri Venkata Chaganti,Chair/Founderof VCube Business Solutions and VedaUS. Adhvaryu Shri Suresh Volam  got the Gharhapatya Agni from the main Purohit Shri Vishwamitra Chaganti and proceeded to light the Gharhapatya and Avahaniya Agnis. Dakshinnagni was led by Hotha Shri Sai Ram Karumanchi and Sambyagni was led by Hotha Shri Giri Kandala. Agneyagni and Vayavyagni were led by Hothas Shri Neelam Srinivas and Hotha Shri Chandramohan respectively.Central YajnaKundam at the top of all the layers was dedicatedly taken care by Hotha Shri Sai Ram Karumanchi.

Adhvaryu Shri Suresh Volam, and Hotha Shri Shastry were the architects of the 3 dimensional Shri Chakra Rajam Yajnakundam. Hotha Shri Sai Ram gave the initial and final touches to the 3 dimensional Sri Chakra Rajam Yajnakundam. Mathematical Simplicity was handled by Hotha Shri Giri Kandala, while  Hotha Shri Sreenivas Neelam handled the homam  materials. This entire process was approved and designed by Brahma and chief Architect Shri Venkata R Chaganti. At the conclusion of about four hours of fervent prayers and meticulous and deeply sacred ceremony,all the devotees were served delicious prasadam and dinner.