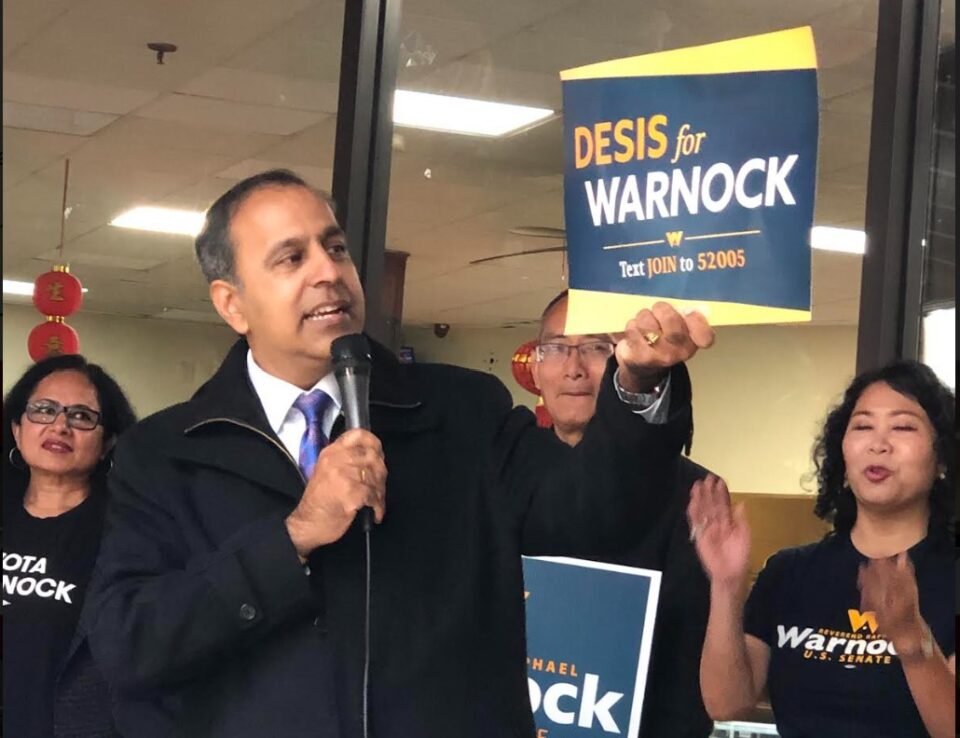 Atlanta, GA, December 5, 2022: A little-known mall in Chamblee was under the national spotlight on Saturday afternoon, when Asian American heavyweights from the political and art worlds made a final, feverish pitch to get the votes out for incumbent Democratic candidate Rev. Raphael Warnock. The runoff election for the only remaining midterm race is tomorrow, Tuesday 6 when Rev. Warnock will face Republican challenger Herschel Walker one more time.

The stop at the quaint Chinatown Mall was one of the many venues over the weekend where the Democrats targeted Asian American voters whose numbers have seen a sharp hike in recent years.

“In 2016 there are roughly 70,000 Asian Americans who turned out and voted. In 2020, the number was 134,000. The difference is 60,000 votes,” said Congressman Raja Krishnamoorthi, one of the speakers. “That is 5 times the margin that Joe Biden won by in the state of Georgia. So, Asian Americans elected Joe Biden to the presidency. And now, we are going to be the difference makers in this race,” he said.

Rep. Judy Chu, the first Chinese-American woman to be elected to Congress echoed similar sentiments. “You can tell how important this race is because we have six Asian American members of Congress come here to make sure that we are victorious in this race,” she said.

Rep. Chu said she was invited to Georgia in 2018 and was impressed with the power and potential of the AAPI community. “I could see its growing influence in each of the big races that are affecting our national scene. There is so much at stake in this country,” she said.

Representation was a recurring theme of the afternoon. Congresswoman Pramila Jayapal of Seattle, the first South Asian woman in Congress, reflected on her meeting with Stacey Abrams during her first visit to Georgia 10 years ago as part of her immigrants’ rights organization, Hate Free Zone.

“Stacey had this amazing plan for building black, brown, and indigenous power in Georgia,” she said.

“When we represent something, it’s not just that policy gets better and our voices get heard at the table, it’s also that people can see their futures differently. Because of all these people in the legislature, they see an opportunity for themselves and they run. That is why in Washington, we have 5 South Asian women in the state legislature. We are changing what representation means.”

Shekar Narasimhan, the founder and chairman of the AAPI Victory Fund said AAPIs representing 38 countries “are holding hands for one purpose— to repudiate the evil that is coming from the other side. This is about morality and character and there is only one person in the race who represents character and integrity and the future for us.”

Narasimhan said the weekend pitstops included visits to six different places of worship. “We need to pray for the Reverend and for the blessings of this country that has welcomed us,” he said.

Rep. Mark Takano, the grandson of Japanese immigrants and the first openly gay non-white member of the House applauded Georgia for electing more AAPIs to the state legislature than the state of California. “AAPIs in Georgia are leading the way and blazing a path forward for all of us,” he said.

Rep. Marilyn Strickland, who has roots in Georgia and calls herself a proud African-American woman and the daughter of Korea (she is Korean-African-American), said, “when we show up, we are the difference between winning and losing.”

State Representative Sam Park, the first Asian American Democrat to be elected to the Georgia legislature, said Asian American voters had changed the course of history by electing President Biden in 2020 and were ready to do it again for Rev. Warnock.

Long Tran who is the newly elected representative from Georgia House District 80 credited AAPIs and the Hispanic community in her district for getting up and door-knocking.

Congresswoman Grace Meng of New York spoke about the growing strength of  AAPIs in the Georgia legislature. “Not only is Sam (Park) not alone in the state legislature anymore, Georgia has the highest number of Asian American state reps out of any state in the country.”

“That does not happen by accident,” she said. “That happens because all of you have worked very, very hard. And because of your efforts, we have been able to change and improve policies and legislation that directly go towards helping our Asian communities here in Georgia and across the country.”

Hollywood actor Daniel Dae Kim said he was motivated to fly down to Atlanta as a concerned citizen. He quoted statistics from a recent Asian Americans Advancing Justice study called the Future of Voting that analyzed voting trends in Georgia in 2020.

“I’ve actually learned a lot today,” he said. “There has been a 52% increase in turnout in 10 years among Asian Americans in Georgia, and 45,000 Asian Americans voted for the first time (in 2020).  These are important figures,” he said.

“On Hamilton, I got to talk about Democracy every single day,” she said. “I believe art changes culture, and culture changes policy. And the only way we are going to be able to do that is by working together.”

She exhorted the community to “get all of our aunties and uncles out to vote.”

Korean American author Minjin Lee, author of the critically acclaimed bestseller, Pachinko, said the world is seeing a rise in authoritarianism and persecution, where votes do not matter anymore. “It’s important to understand the psychology of some AAPI voters who are afraid of being imprisoned or persecuted or fired for who they vote for,” she said.

“Right now, little girls in Iran are standing up to authoritarianism.  In China, students are protesting authoritarian regimes. Right now, all across America, we are having brave young people fighting against lies and fascism, and repression. Our votes are sacred and our democracy is so deeply important to each of us,” she said.

Warnock’s opponent, Hershel Walker’s campaign also organized last-minute canvassing rallies across Georgia. According to election officials, 1.8 million Georgians cast their ballots during the early voting period that ended on December 2. Voters also created a new record for single-day turnout in early ballots, casting 350,000 votes on Friday. The race, ultimately, will depend on voter turnout on Tuesday.