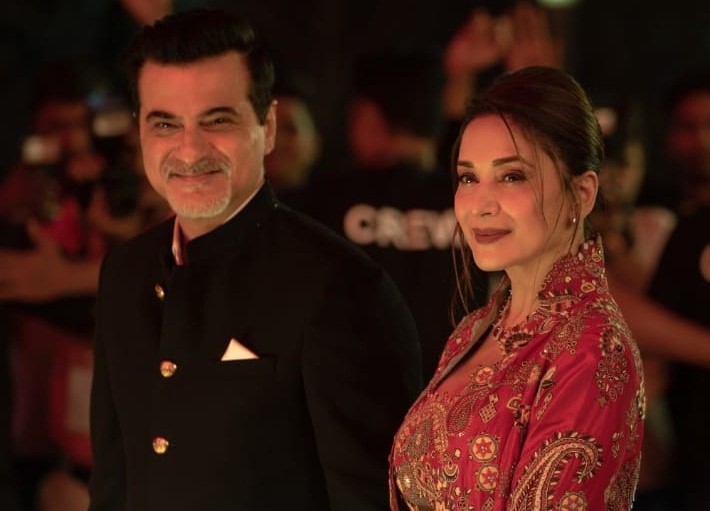 Every year thousands of people vanish without an explanation, and most of these disappearances go unnoticed. However, it is a different matter altogether when the missing person happens to be a celebrity.

Between the period of missing and resurfacing of the missing person, there is a lot of speculations, foul play is always taken into consideration but not all are lucky to reappear among those who surface alive. Many, however, do not actually go missing in the first place; for them, the celebrity life is a little too much to bear.

Thus, at the very onset, the title of this series is a dampener by itself. Whatever the mystery or aura of the show, at the back of your mind, you know its premise is just an attention-seeking tactic.

This review is based on the first six episodes of the series. Anamika Anand (Madhuri Dixit) is a renowned actress on the last leg of her career. Her husband, Nikhil More (Sanjay Kapoor), is producing a film with her as the lead. Mid-production, they realize that the film is not shaping as per their expectations, and thus they rope in Manish Khanna (Manav Kaul), a superstar whose on-screen chemistry with Anamika is palpable to the audience.

But just before the film is to be released, Anamika Anand goes missing.

Narrated in a non-linear manner the series begins with Anamika Anand missing for 48 hours and Police Officer Shobha Trivedi investigating the case. During the investigation, we learn about Anamika’s fading popularity, her dysfunctional family, and resurfacing of her long-discarded flame Manish Khanna in her life.

By the second episode, it is four days that Anamika is missing and unravels events that occurred six months earlier. Loaded with flashbacks and packed with guilt and moments of joy, we hear Anamika tell her daughter Amara (Muskkaan Jaferi), “Fame is not glamour, fame is dangerous, and you don’t know how one has to deal with people.”

The statement is subtly loaded but is dismissed in the natural course of the conversation when her daughter reveals to her that she wants to follow her mother’s footsteps to stardom.

Episodes three and four reveal events that occurred five months earlier. Here the narrative meanders at a laid-back pace, and you find the momentum of the narrative dip. But in the sixth episode, a stray statement like, “Ab hogi hamari film hit,” from an unconcerned Nikhil, you become a dispassionate viewer because by then timelines merge and you aren’t interested in co-relating the events that took place two months ago with the present.

Conversations and scenes appear verbose and forced in most parts of the series, apart from the Marathi tinge in the dialogues. Also, in the sixth episode, the scene concerning the personal life of the investigating officer Shobha Trivedi is unwarranted.

Overall, mounted with ace production values, the series is engaging because of the performances of its ace star cast, all of whom are a bit above average. None of them add any nuance to their characters. But the spotlight is naturally on Madhuri Dixit, who makes her debut on the OTT platform. With her typical charismatic demeanor and dance sequences which one has oft seen on the large screen, she is sure to please her fans.

Among the younger lot Lakshvir Singh Saran, Muskkaan Jaferi, and Gagan Arora are sincere and promising.