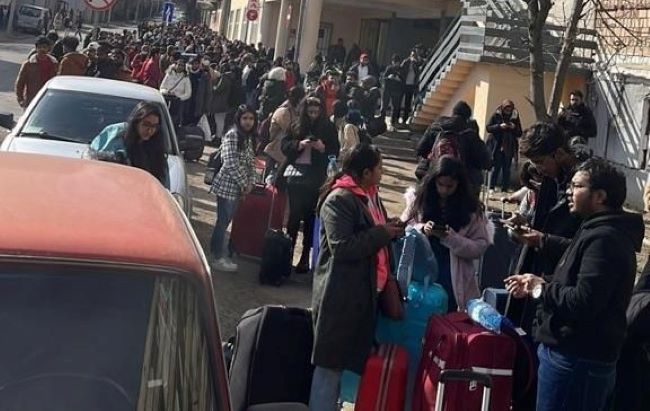 New Delhi, Feb 28 (IANS) A group of 21 Indian students of Chernivtsi National University are still stranded in Chernivtsi, Ukraine. The students are afraid as they have been told that local authorities have issued shoot at site order as the Russia-Ukraine war has escalated.

Of the 21 students, 11 are girls and 10 boys who are stranded at Chernivtsi.

Speaking to IANS, Priya, one of the students, said Indian students were stranded in Ukraine and needed help.

“For last four days we have been eating only three to four spoons of rice. Now the Embassy has asked us to board a train on our own risk to move out of the town. We somehow reached Chernivtsi and have spent nearly Rs 2.5 lakh so far. No train was available and we are losing hope,” she told IANS.

She narrated the ordeal, saying Indian students were stranded on the roads.

She said Indian students like her were running out of money, food and now their lives were also at risk.

“We are roaming on the road and can meet with any fate. We need help,” she told IANS while requesting to make arrangements of any kind of help.

The students also shared a video with IANS narrating how they travelled to Kiev, Lviv, Dnipro and reached Chernivtsi. They said no one was ready to help them out and were unable to cross the border as it was shut down by 8 p.m.

The students want urgent intervention of the Union Ministry of External Affairs and the Prime Minister’s Office to save their lives.

Indian government has launched ‘Operation Ganga’ and as of now have sent four flight to bring students back in India. The fourth flight was sent on Sunday afternoon.