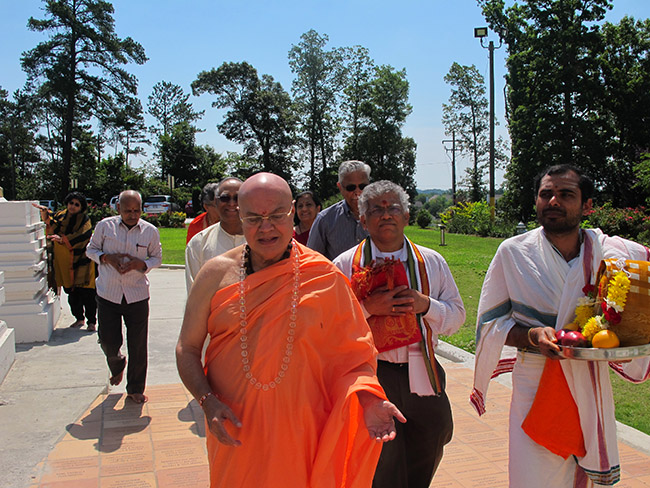 Atlanta, GA: Swami Adhyatmanandaji, President of the Divya Jivan Sanskrutik Sangh, Sivananda Ashram,Ahmadabad,India, was here from June 3-8 as a part of his Centenary Tour 2015 marking the birth centenary celebrations of Swami Chidanandaji Maharaj.

Swami Chidanandaji Maharaj (1916–2008) was well known in India as a yogi, jnani and spiritual leader. He succeeded as President of the Divine Life Society in 1963, after the death of his predecessor, Swami Sivananda, who founded the Divine Life Society. H.H. Swami Chidanandaji, right from the beginning worked and served the cause of Sivananda’s mission tirelessly, and to spread his Divine Life message far and wide, not only inIndiabut also in countries outside. He inspired others through the practice of self-discipline. He practiced a non-denominational, universal form of yoga. He often led group chanting that named and elevated all of the prophets and sages of all of the world religions equally (Lord Jesus, Ahura Mazda, Lord Buddha, etc.). 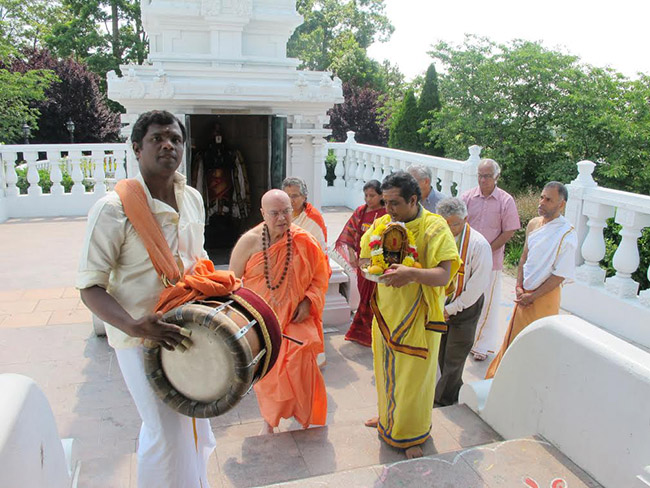 Dr. Ravi Sarma, a well-known oncologist ofAtlanta, while introducing Pujya Swami Adhyatmanandaji at Rotary Club of Emory Druid Hills (RCEDH) said: “InAtlantafor the past several years it has become a spring, early summer tradition to look forward to a visit from Swami Adhyatmanandaji. Any time you meet Swamiji, you are stuck by what all other people have met him before said. These include the sages and monks from all faiths, administrators etc., whom we revere. Seen the same attitude to describe how it feels to be with Swamiji. The way the description goes like this, he radiates peace, he radiates love, he radiates the inner beauty that comes from someone who is happy inside and what he shows to you is what he feels. So it’s one of those rare individuals that you come across that immediately attracts you, not because of showmanship, not because of all honors that he have, deservingly received. None of that. Simply you sitting before Swamiji, normal conversation, Nothing serious, but very profound at the same time, that’s what strikes me to think about Swamiji.”

“Listening to him is learning. He speaks many languages. Swamiji’s mission, message is one universal. Human beings, we are, what he calls external cover being what it is inner human being; real people and we communicate each other using the language of love and means of service, to serve people,” Dr Sarma added.

The worldwide propagation of the Wisdom Teachings of Yoga and Vedanta and the effective spread of the knowledge of scriptures that Swami Adhyatmanandaji has been doing over the past more than 40 years, has brought about an effective spiritual awakening amongst innumerable people of all age groups and varied sectors of our present day international society.

Swamiji delivered a birth centenary lecture titled “Saints of India and their contribution to world” at Chinmaya Mission of Atlanta. The topic “Saints of India” is not only meaningful, but also very appropriate as birth centenaries of two patriotic saints of India, Swami Chinmayanandaji (b.1916) and Swami Chidanandaji (1916) are being celebrated world wide in a big way through 2016. Both swamijis are disciples of Swami Sivanandaji, founder of the Divine life society & Sivananda Ashram,Rishikesh,India. Being known to both swamijis, Swami Adhyatmanandaji has shared many incidents from the lives of both Swamijis.

Swamiji’s inspiration for healthy and positive thinking will leave long lasting effects in people’s mind,  In His words,” Think positive, Be Bold, Fear Not, Abide in Truth, Stand by Truth and Rest will follow naturally. Pray fervently and ceaselessly. Remember God and Gurudev. Do your daily Spiritual Sadhana. Abide in the Supreme”

Pujya Swamiji’s discourses and yoga teachings have brought joy, peace and bliss not only to spiritual aspirants and yoga enthusiasts but also to other people in different walks of life.