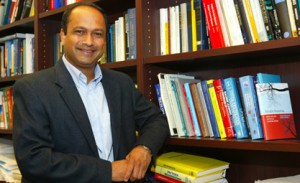 Washington, Feb 5 (IANS) Yet another Indian-American has been named to a top academic job with the appointment of Sanjeev Kulkarni as the next dean of the prestigious Princeton University Graduate School.

Kulkarni, professor of electrical engineering and director of the Keller Center, succeeds William Russel, who has served as dean since 2002 at the New Jersey-based institution, according to a university announcement. His appointment will be effective March 31.

“Sanj has a well-deserved reputation for excellence as an interdisciplinary scholar, a versatile administrator and a constructive colleague.

“He cares deeply about the welfare of students, and he will be a thoughtful and effective advocate for graduate education in the years to come,” Eisgruber said.

Kulkarni, who joined the Princeton faculty in 1991, said he appreciates the chance to serve the University and have an impact in a new role.

“Through more than 20 years as a faculty member and administrator, I have developed a very deep appreciation for Princeton,” Kulkarni said. “It is an honour and a privilege to have the opportunity to serve the University in this capacity.”

He was the master of Butler College, an undergraduate residential college from 2004 to 2012; and since 2011 has been the director of the Keller Centre, which has the broad aim to “educate students to be leaders in a technology-driven society”.

The Graduate School enrols about 2,600 students pursuing master’s and doctoral degrees in 42 departments and programmes.

Kulkarni has had a distinguished career as a researcher and educator at Princeton.

His research spans a broad range of areas related to understanding fundamental limits and developing methods for processing data and information, with a focus on information theory, machine learning, statistical pattern recognition, and signal and image processing technology.