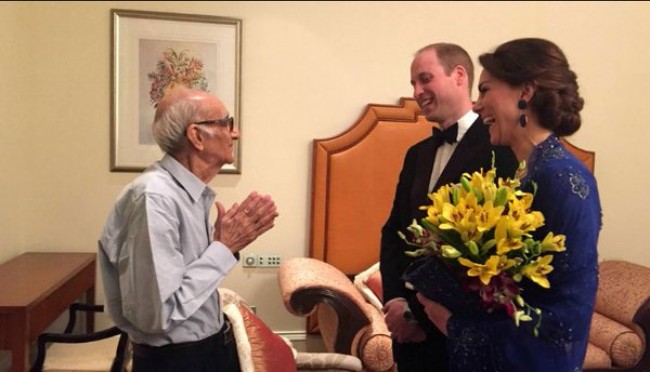 Known for his love for Britain’s monarch, Queen Elizabeth II and the royal family, he got a chance to meet the visiting Duke and Duchess of Cambridge, Prince William and his wife Kate Middleton, on Sunday evening.

The 93-year-old Kohinoor was hoping to invite the royal visitors and serve them his legendary ‘Chicken Berry Pulao’ at the eatery in Ballard Estate founded in 1923 by his father, late Rashid Kohinoor.

Instead, he was given an audience with Prince William and Kate at Hotel Taj Mahal Palace on Sunday evening, before the royals attended a glittering charitable gala fund-raiser with top Indian industrialists and filmstars.

“The duke and duchess heard about the story of a 93-year old Mumbai local of Britannia & Co. cafe. Their royal highnesses were very touched and invited him to their hotel before last night’s charity gala,” the Kensington Palace tweeted on Monday.

On his part, the thrilled nonagenarian Kohinoor gushed: “I am a fan of the royal family.”

At Britania eatery, Kohinoor is known to give personal attention to each and every patron, moving from table to table as his staff serves them the restaurant’s delicacies.

He said that before independence in 1947, the restaurant used to serve delicious continential dishes, but after the departure of the Britishers, the restaurant started offering mouthwatering Parsi and Mughlai cuisine, including the famous ‘Chicken Berry Pulao’.