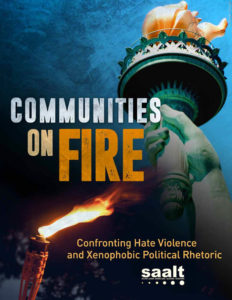 Atlanta, GA, February 2, 2018: South Asian, Muslim, Sikh, Hindu, Middle Eastern, and Arab communities are the target of increasing levels of hate violence and xenophobic political rhetoric in the United States, with record attacks since the election of President Trump in November, 2016, South Asian Americans Leading Together (SAALT) said in a report released today. The uptick in anti-Muslim attacks runs parallel to the surge in this administration’s anti-Muslim policies and rhetoric.

SAALT’s report draws a direct line between this administration’s anti-Muslim agenda and increasing attacks, revealing that of the 213 incidents of hate violence documented, one in five perpetrators invoked President Trump’s name, his administration’s policies, or his campaign slogans during attacks.

“Our nation prides itself on the freedom for people of all religious traditions to practice their faith without fear or intimidation,” said Suman Raghunathan, Executive Director of SAALT. “However, through its policies and rhetoric, this administration’s incessant demonization of Islam has created an environment of hate and fear-mongering for Muslims and those perceived to be Muslim. Deadly shootings, torched mosques, vandalized homes and businesses, and young people harassed at school have animated an acutely violent post-election year. This administration must break eye contact with white supremacy if our nation is to live up to its highest ideals of religious freedom.”

The report also underlines the way intersectionality informs hate – both the identities of victims targeted and the systems that criminalize our communities. Women who identify or are perceived as South Asian, Muslim, Sikh, Hindu, Middle Eastern, or Arab were the targets of attack in 28% of the 213 documented hate incidents post-election. Women who wear hijab or head scarves are particularly vulnerable, accounting for 63% of the documented hate incidents targeting women. The report discusses the intersection of immigration, racial profiling, surveillance, and criminal justice policies that compound against our communities.

“The growth of white supremacist hate groups and mounting attacks on our communities are proof positive that this administration’s anti-Muslim agenda is not making America great, it’s making Americans afraid,” Raghunathan said. “The daily decay of our democracy can only be repaired by dignity and full inclusion for all Americans, regardless of faith, race, or national origin. SAALT and our allies are going to go the distance to see this demand realized.”