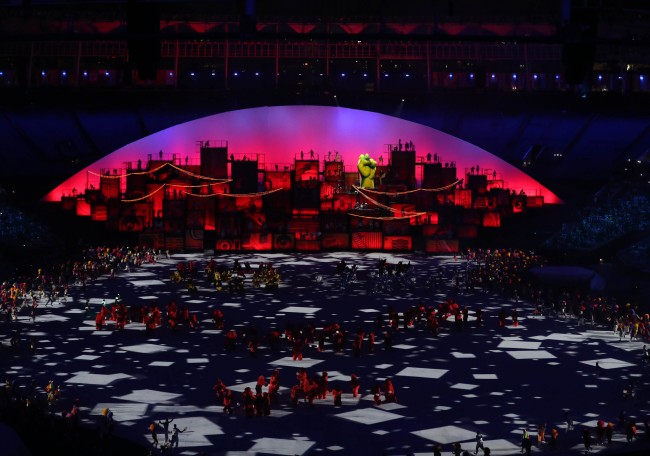 Rio de Janeiro, Aug 6 (IANS) The 31st Olympics, the first in South America and only the third to be held in the southern hemisphere, formally opened on Friday with a colorful ceremony depicting Brazil’s vibrantly diverse culture and dedicated to its history and the Earth’s environment, at the Macarana stadium here.

The huge statue of Christ the Redeemer, that dominates the skyline of the Brazilian capital and where the Olympic torch was lit at dawn, was specially lit up ahead of the opening ceremony starting at 8 p.m. local time (4.30 a.m. IST). However, legendary footballer Pele, who was widely expected to light the Olympic cauldron, pulled out a few hours before due to ill-health.

The ceremony, which has famed Brazilian director Fernando Meirelles, known for crime drama “City of God”, Andrucha Washington and Daniela Thomas as creative directors, started with thousands of performers entering the arena with sheets of metallic paper, quickly transformed into a sort of “pillow” and struck hard to create a beat that resounded through the stadium.

The Brazilian national anthem “Hino Nacional Brasileiro” was then rendered by the gentled-voiced sambista Paulinho da Viola, accompanied by a string orchestra.

A panoramic depiction of Brazil’s history, including its slave trade past, followed before a unique homage to Alberto Santos-Dumont, who is in Brazil, credited with inventing the first aeroplane and taking the first flight, instead of the Wright Brothers, as a light plane flew inside the stadium before taking off into the night sky across a celebrating city.

But the high point was in rendition of the late Tom Jobim’s legendary “The Girl from Ipanema”, performed by his grandson Daniel as supermodel and national icon Gisele Bundchen, clad in a long sleeved, gold-sequin spangled dress, sashayed across on her most ambitious catwalk across the stadium. And her trail, formed into the contours of iconic works by Brazil’s greatest architect, Oscar Niemeyer.

The hour-long cultural fiesta, capped by a spectacular display of fireworks, led to the Parade of the Nations, or the march past of the participating contingents, comprising 207 including Kosovo and South Sudan who are making their debut. Also participating for the first time is the 10-member Refugee Olympic Team comprising refugees from Syria, South Sudan, Ethiopia and Congo.

Each team, dressed mostly in traditional costumes, accompanied by young children bearing a sapling and trailed by a team of traditional musicians, entered the arena to applause, though the loudest cheers were reserved for teams from the neighbouring countries, as well as those making their debut and Palestine.

For the first time, the athletes were handed tree seeds, which are intended to be sown in the Athletes’ Forest in the area of Deodoro, planned as Rio 2016’s enduring legacy.