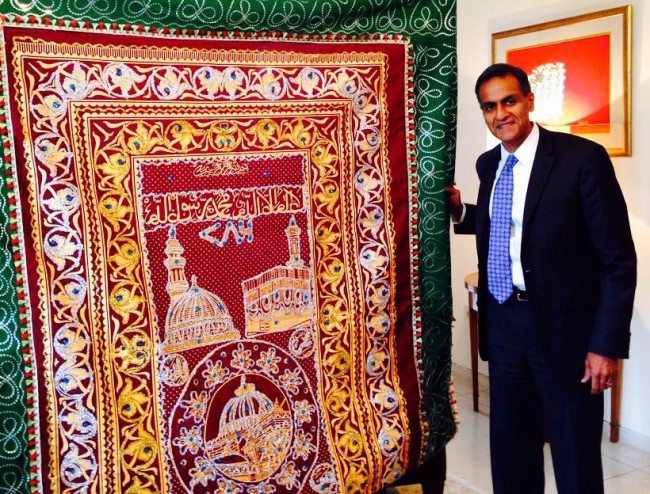 A red coloured, richly embroidered ‘chadar’ (holy cloth) will be offered on Obama’s behalf at the mausoleum of the Garib Nawaz on the inaugural day of the weeklong urs, Haji Syed Salman Chishty, director of Ajmer’s Chishty Foundation, told IANS.

The ‘chadar’ was solemnly handed over to Haji Chishty “on behalf of the US government and Obama By US ambassador Richard Verma, deputy chief of mission Micheal Pelletier and other officials on Friday morning, with a request to present it at the Ajmer Dargah Sharif.

“It’s a historic day and a welcome moment. It’s the first gesture of extending spiritual greetings of peace to the Ajmer Dargah Sharif from a non-South Asian country’s head of state,” a pleased Haji Chishty, the 27th descendant of the saint, said while on a visit here for a function.

He explained that such ‘chadars’ and offerings are received with much respect and grace from presidents or prime ministers and other top leaders of several South Asian countries, including regulars like Pakistan and Sri Lanka.

“This is the first time that any non-South Asian country’s head has sent a ‘chadar’ to the Ajmer Dargah Sharif. It will set a new trend for global peace among communities,” Haji Chishty said, adding the ‘chadar’ from the US President will be offered at the mausoleum at 11 a.m. on Monday.

The 32-year old Haji Chishty, who is engaged in practical research on Sufi traditions and their impact on different cultures and traditions, has lectured around the world on the topic and recently went on a journey of exploration of Iran which he has preserved in the form of a photo-feature exhibited in Mumbai last month.

Haji Chishty arrived from the US where he attended an international Sufi conference and spoke at the United Nations as well as visited Washington and Harvard Univeristy in Boston, earlier this month.

“The underlying message is to promote spiritualism through harmony, peace and love for all, which was represented by the 11th century saint, Sultan-ul-Hind, Gharib Nawaz Hazrat Khawaja Moinuddin Hasan Chishty of Ajmer Sharif,” Haji Chishty said.

The annual urs were launched Wednesday with the flag hoisting on the Ajmer Dargah Sharif after the evening prayers, with the entire Dargah complex decorated and glittering in colourful lights.

On Monday, which coincides with the 1st day of Rajab, the seventh month of the Islamic calendar, the urs officially starts with the ‘mehfil-e-sama’ in the Dargah Sharif.

There are various events lined up during the period with April 25 the main day of the urs and April 28 the concluding day, when the entire Dargah Sharif will be washed by devotees.

Moinuddin Chishty (1141-1236), who hailed from Sistan region of eastern Iran, travelled to India and introduced and established the ‘Chishti’ Order of Sufism at Ajmer.

It was mainly after emperor Akbar, who undertook a journey on foot from Agra to Ajmer during his reign that the Dargah emerged as one of the most important pilgrimage centres in India, which is revered by people of all religions.

Over the past eight centuries, it has been a favourite of several rulers, kings, emperors and in recent years, several leaders from Pakistan and other countries have visited the Ajmer Dargah Sharif to pay their respects.