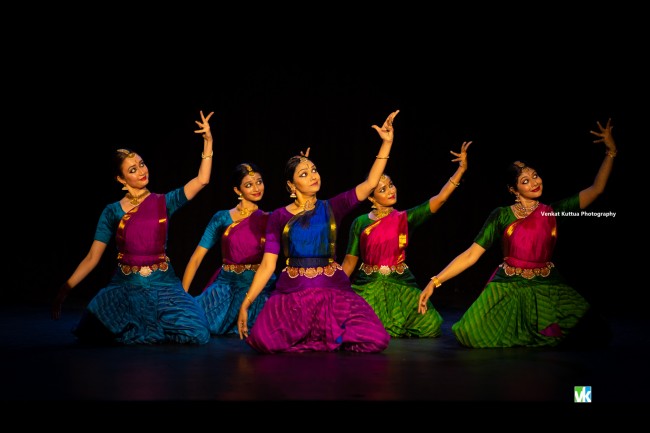 Atlanta, GA, June 7, 2018: Delicate yet dramatic, subtle yet substantial, Rama Vaidyanathan’s Vivartana showcased the Bharatanatyam art form at its glorious best at Berkmar High School on May 25, 2018. Presented by Deeksha School of Arts, Vivartana – Dance Transforms is the brainchild of Bharatanatyam exponent Rama Vaidyanathan who was on a 12-city tour across the US, with Atlanta presenting the grand finale of the tour. The ninety-minute piece is Vaidyanathan’s first group choreography.

Vivartana was a production commissioned by the National Center for Performing Arts (NCPA), Mumbai with the theme of transformation. Vaidyanathan naturally gravitated towards dance as the medium that transforms incorporating her own transcendent experiences as a dancer.

As the title suggests, Vivartana signifies the splendor and spell of dance that transforms not just the dancer, but the entire space around the dancer and eventually anyone who comes in contact with the art-form. 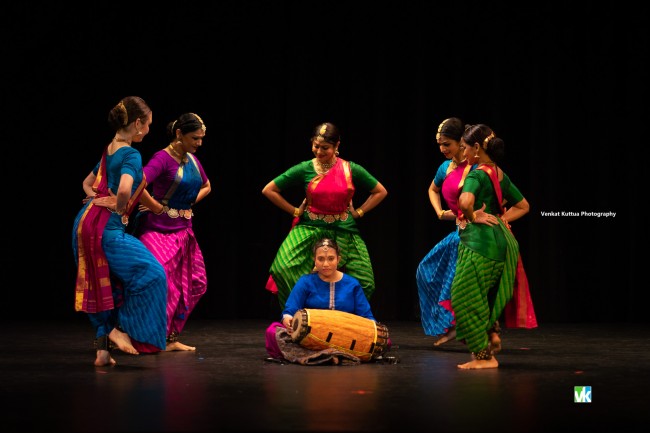 Opening with an artiste drumming on the mridangam and presented in five parts, Vivartana began with Pratikriya – Dance Responds, a piece depictive of the dancer’s response to dance. Assimilating a poem in English by Vaidyanathan translated to Sanskrit by Divyanand Jha and music composition by Ramya Sundareshan Kapadia, Pratikriya captured the dancer’s response to the dance, becoming one with rhythm as dance transforms her pulse to pace, becoming one with her space around as dance transforms her space, becoming one with movements as her body transforms from stillness to motion, and eventually becoming one with the world, as her soul transforms from singular to plural. As the slow drumming picked up pace, dancers performing in perfect synchronization with the beats picked up speed, dancing around the mridangam with Vaidyanathan joining towards the end. Vigorous, vivid moves offered a powerful and poignant presentation of Vaidyanathan’s poem through the audio-visual medium. 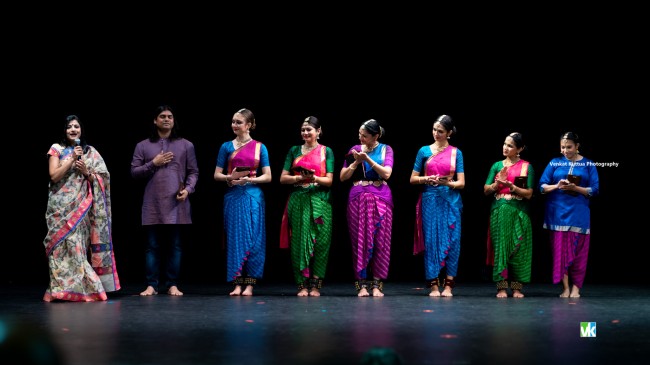 Embracing theatrics in Pratibodhana – Dance Awakens, the piece espoused a poem in Gujarati by Narsihn Mehta with music composition by Dr. S Vasudevan, presenting Vaidyanathan as the poet who watches in awe, the Raas Leela, or dance of Lord Krishna and the Gopikas. Expressive and energetic, she went on to enact how Lord Krishna’s embellishes himself for the Leela with all the women around him. 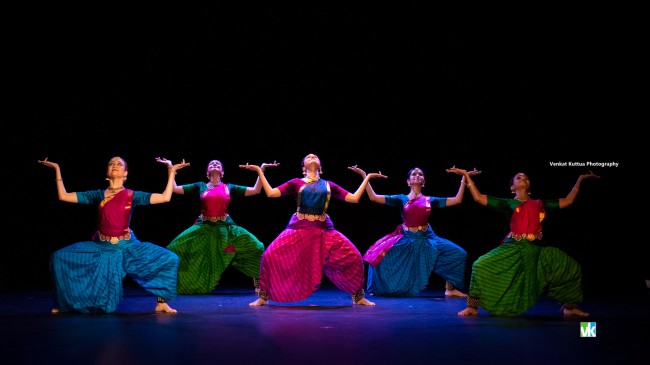 The adaptation, Yatho Hasta thatho Drishti, Yatho Drishti thatho Manah, Yatho Manah thatho Bhaava, Yatho Bhaava thatho Rasa, roughly translated to Where the hands are, go the eyes, where the eyes are, goes the mind, where the mind goes, there is an expression of inner feeling, where there is bhaava, mood or sentiment is evoked, not only outlines the virtues of the dance and a dancer, but apply to life in general and Vaidyanathan’s intense interpretation through the art form only enhanced the perception.

With invigorating, intricate moves and inspired choreography, Vivartana encapsulated the essence of the Bharatanatyam dance form, elevating and enriching the experience with a wholesome, holistic approach.