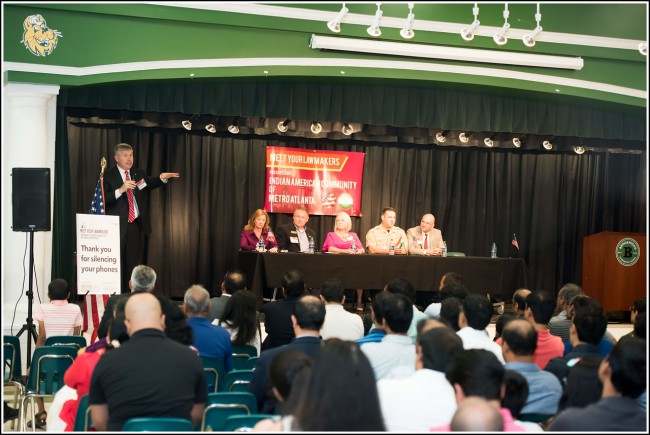 “When we have problems, whether it is within or outside our home, we call our own fellow men. We never even think of calling our local representatives,” said Viju Chiluveru. “The main purpose of this event is for you to know that can reach out to the authorities and they will help in any way they can.”.

Sreeram Royyala extended a warm welcome and introduced the guests.

“My job is not to be the smartest but the best representative for the community,” said Woodall, mixing his address with humor, as Royyala mentioned each of the other guests had IT experience.

Extending a partnership based on trust, Woodall lauded Narender Reddy in the audience. “I have known Narender for the past 20 years and he is not a complainer, he is a problem-solver. We work together to make a difference in and around the community, that builds the foundation of trust and with that, there is no limit to what we can get done together.”

“You all sitting here, have never been more powerful in the halls of congress than you are right now. The President or Vice-President of the US is sitting down with me to hear from you, once, sometimes twice a week. You and I have the opportunity to move ideas through,” said Woodall, encouraging the community to get more involved by expressing concerns and sharing ideas with the representatives.

“If we say yes to employment-based immigration today, we can always come back to get the family immigration later,” he said about the green card backlog for H1 visas. H1 was only one aspect of immigration, noted Woodall, adding that a state such as Wyoming is more worried about H2a and H2b visas to get berry pickers. “If everyone’s community looked like my community in terms of economic vibrancy, education, safety we would have a different conversation. I have to win that debate the same way you have to and that’s one family at a time, one conversation at a time, ” he said, with reference to clearing the backlog.

When a member of the audience got emotional about the issue of race, the Kuchibothla case in particular, Woodall pointed out that government cannot control people’s thought process. “The government cannot outlaw a person’s thoughts but law enforcement can and will outlaw their actions,” he said.

Gun control is a matter of cultural challenge, opined Woodall. “Santa Claus got me my first gun. My relationship culturally with guns goes back to my childhood. My mom slept with a loaded 38 under her pillow. This is not a legal or constitutional problem. It is a cultural problem. These people hurting children in our schools are not old men like me, it’s children hurting children. There are unlimited number of tools we can use to hurt one another and I can try to regulate them all but we have a cultural problem of why it is the way we treat each other.”

He admitted that issues such as bump stocks had slipped through the cracks and were being worked on. He noted that only 60% of the schools have School Resource Officers in school, even one day a week. He added that the Federal government has passed comprehensive mental health legislation to deal with kids with mental health issues. “Focus in DC is not how we are hurting each other but why we are hurting each other and who’s doing the hurting and what can we do to help,” in argument that guns were not the problem but the reasons and certain people in particular were.

“The convergence of AI, 3d printing and autonomous vehicles present a lifetime opportunity. That convergence can be led by Forsyth county and we need your help,” said Rep. Jones urging the community to express their opinions share ideas. “We value diversity of background, we value diversity of opinion and frankly that where the best solutions come from” he said. 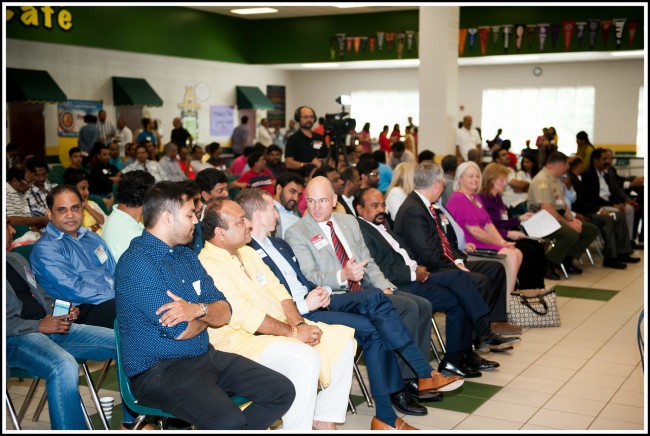 “I love Forsyth for the schools, parks, libraries, schools, safety and low taxes,” said Kristin Morrissey. Addressing school safety, she said, the Superintendent of Schools had formed a Task Force with law enforcement and medical professionals on board. The Task Force had suggested various measures that will soon be adopted by the school system.

“Most burglaries happen between 4 pm to 9 pm. We have an organized crime entity that is all over metroAtlanta targeting Indian and oriental community,” Freeman said. He highlighted the dangers of posting vacation plans on social media, adding that the burglars were tech savvy and mined data from social media outlets.

He urged folks to call in if they find anything suspicious in the neighborhoods.

“We have seen more and more of citizen engagement and that is one of the great things about events such as these – is to bring together and have make ourselves accessible to citizens.  said Laura Semanson

“You live in the top 3% of the worlds’ best quality of life, schools and I’m proud to represent you” said Dennis Brown. Addressing construction issues, he said Forsyth was a growing community and public must co-operate in building a better infrastructure.

A commendable initiative by Idealogy Media, one can surely hope that this is the first of many more along the way, as Woodall commented.  ​