Kicking off with the auspicious Shankhanadam (Blowing of the conch shell) and the traditional lighting of the lamp by the speakers, Pandit Gyanprakash Upadhyay recited a shloka in Sanskrit and talked about the glorious Hindu civilization and Sanatan Dharma.

Sudha directed the crowd to a presentation that traced the Indian economy through the ages starting with the times when Indian economy was the ranked the highest in the world, its fall from grace during the colonial period and the current economy. The presentation summarized the mission and purpose of the WHC, highlighting its distinguished speakers and guests including Rashtriya Swayamsevak Sangh (RSS) chief Mohan Bhagwat, Uttar Pradesh Chief Minister Yogi Adityanath, Maharashtra Chief Minister Devendra Fadnavis, Tibetan spiritual leader the Dalai Lama, Art of Living founder Sri Sri Ravi Shankar, and Pranav Pandya from Gayatri Parivar.

The three-day event is also likely to see top corporate leaders from India and the United States, leaders from Fortune 500 companies, Bollywood and Hollywood stars.

“It is not just Hindu Economic Forum, but Hindu Economic Power and a movement in itself,” said Chapter President and CEO, Shiv Aggarwal. Lauding Swamiji’s efforts in creating surplus wealth to uplift society, Aggarwal noted that economic power, as recognized by Swamiji is the key to prosperity. Citing examples from his own experience, Aggarwal said that it is important to understand everyone’s strength and building a business around that strength at the right time leads to success. Quoting his father, “Time does not respect those who don’t respect time” he said, adding that the time is right for all Hindu businessman to join the Hindu Economic Forum to share and gain expertise from fellow Hindu leaders. 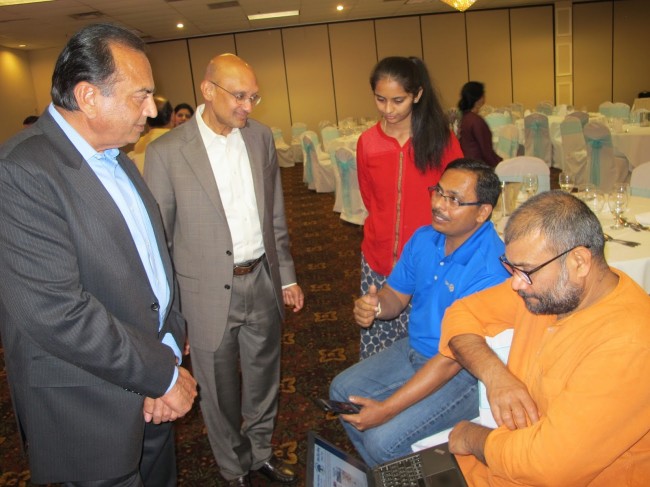 “This is a movement, not just a forum as Shiv Aggarwal Ji rightly said. The benefits of the forum will be experienced by generations to come,” said Swami Vigyanand. “Centered around the theme “Sumantrite Suvikrante” — Think Collectively, Achieve Valiantly, seven parallel conferences – Economy, Political, Media, Education, Women, Youth and Organization, at the WHC will focus on an area of strategic importance to the Hindu civilization and humanity.” Drawing from his experiences from Asia and Africa, he talked about the work done by WHEF in creating an ecosystem to help Hindu business flourish locally and globally by promoting a business networking platform.

Stressing on how a Hindu Sadhu, Swami Vivekananda, had galvanized ancient Indian traditions, Swami Vigyanand noted that commemorating 125 years of his Parliament of Religions address in Chicago was the source of inspiration for the venue of WHC 2018.

“That one speech changed the image of Hindu society in America forever,” he said. He went on to recollect the historic journey of the Sadhu and the illustrious Jamshedji Tata on the ship Empress of India, where the two met and held discussions that affected India’s destiny in many ways including creation of the Indian steel industry, which is one of the leading steel manufacturers around the world, and the formation of a world class institution, Indian Institute of Science in Bangalore.

“We need to create market access across geographic zones and countries, spreading from Auckland to Alaska and Oslo to Johannesburg, cutting across the entire globe. Similar cooperation can be envisaged in the area of capital, enabling availability of appropriately priced capital. Also, technologically savvy Hindus should be matched with those who can convert technical innovation into business with ideas, funds and market access,” said Swami Vigyananad, adding that the Hindu Economic Forum at WHC would provide a perfect platform for the same.

“Twenty first century is the knowledge economy,” Swami Vigyanand quoted author Tarun Khanna.  He noted that China is leading in education system while India has taken a back seat. He said that the Hindu Education Forum had submitted recommendations to the government, several of which have been accepted.

“He who controls the media, controls the mind of the people. Realizing the power of the media as the most potent force on the global stage is imperative to Hindu society,” Swami Vigyanand noted. He said that most Hindus complain about the media but do nothing about it. “The Hindu Media Forum will devise strategies to encourage those advocating the interests of Hindu society to establish them in the existing media framework besides penetrating the entrenched media institutions,” he said.

“This is a non-political political organization. We do not do any politics but think about politics. We observe politics,” stated Swami Vigyanand. He talked about SFO which houses some of the most affluent Indian population and yet Chinese dominate politics.

“You have to provide youth the right platforms that they can relate to, such as politics and economics.  The youth is most motivated to challenge the status quo as well as to change it.” He pointed out to history where the young are the first to protest against tyranny, injustice, suppression and exploitation, and declare that they will change the situation. The Hindu Students and Youth forum will fully harness their potential to work for the resurgence of Hindu society on a global basis, he said.

Lack of household savings was the main reason for collapse of European and American economies, he said, adding that one of the main reasons the economy of India remains steady is because Hindu women are careful with savings. He said the Women’s Forum would develop strategies and initiatives for Hindu women to gain critical experience for their workplaces, in the social and political fabric of society, and in their communities and homes, so that they are prepared to take on leadership responsibilities and play a vital role in the overall progress of the Hindu society.

Swamiji pointed out that while hundreds of Hindu organizations are spread across the US and world, they are all divided by language and regions and divided further in their own factions. “Hindu organizations, temples and associations forum will provide a platform to discuss challenges and opportunities for organizations to better meet the needs of their constituencies, develop synergies across organizations, and coordinate with one another for local and global benefit,” He said

“Normally Swamijis come to collect money, but you are here to give us something much bigger,” said Chandrakant Patel in his vote of thanks. He also thanked Sandeep Savla, Sushma Patel, Shiv Aggarval, Ashiana Restaurant, Srinivas Koneti, Raghava Tadavarti, Radhika Sudha, Pandit Gyanprakash Upadhyay, Sneha Mehta and Vasav Mehta for their efforts in putting the event together. The event concluded with Radhika Sudha announcing Shiv Aggarwal’s donation of $5000 for the cause.

More information about the upcoming World Hindu Congress may be obtained at http://www.worldhinducongress.org/

It makes me smile big and cheers me up: 59 special needs kids gearing up for Dream Show