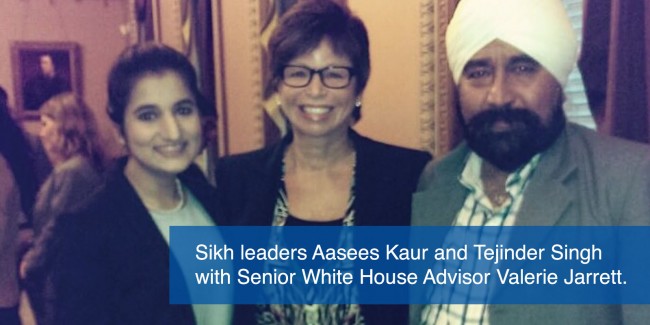 Senior White House Advisor Valerie Jarrett joined Atlanta’s Aasees Kaur and Tejinder Singh, along with Arjun Singh and Dapinder K. Ahluwalia, for a roundtable discussion that featured the Sikh perspective along with a broader discussion on how federal agencies can better combat bias-based bullying.

Aasees and Tejinder are the sister and father of Japjee Singh, who was a victim of bullying in elementary and middle school. At Peachtree Middle School, the bullying escalated into physical violence, and Japjee had to endure assaults that resulted in a broken nose and a swollen jaw that required two surgeries. In one assault, a student cut Japjee’s hair, in violation of his faith. He was called “Aladdin” because he wore a turban, and asked “to go back to his country”. The Counsel for the Sikh Coalition supported Japjee’s family take steps that that eventually led to a landmark settlement between the Department of Justice, U.S. Attorney’s Office and the DeKalb County School District in May 2013.

“My brother spoke out and with the support of the Sikh Coalition, we refused to let the DeKalb County school district ignore the problem of bias-based bullying,” Aasees told The Sikh Coalition. Aasees also volunteers as a Sikh Coalition Advocate. “Now we’re at the White House working to ensure that the rest of the country addresses the problem too.”

Dapinder, like so many Sikh families across theUnited States, faced the horrible choice of speaking up and tackling the problem publicly or fearing that publicity would make the problem worse for her son. “The bullying of my son has altered our lives forever, but to be at the White House, working with the Sikh Coalition, and talking about this problem head on makes me believe that the future for the next generation of children in our schools will be better.”

“Meetings like today show that the Sikh community is a national leader in the movement to stop bullying. We are excited to move this important work forward with The White House,” Arjun Singh was quoted by The Sikh Coalition as saying.