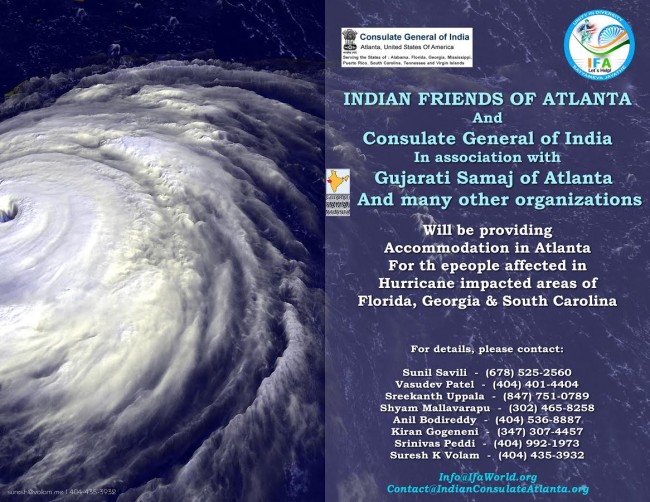 Atlanta, GA, Oct 6: As Hurricane Matthew barreled towards the southeastern United States after killing at least 140, President Barack Obama declared a state of emergency in Florida.

Indian Friends of Atlanta (IFA) with help of Consulate General of India, Atlanta and Gujarati Samaj of Atlanta is providing accommodations in Atlanta to those in need from the Hurricane affected states of Florida, Georgia, South and North Carolina.

“We urge the community to reach us with any help that they can provide to the hurricane victims at info@ifaworld.org,” said a press release issued by IFA.
Of the 140, 136 people have been killed in Haiti with the storm now hitting 140mph as it approaches Florida, Mirror UK reported.

Most of the victims were killed by falling trees, flying debris and swollen rivers.

Due to the emergency declaration in Florida, the Department of Homeland Security and Federal Emergency Management Agency are authorized to coordinate all disaster relief efforts, Xinhua news agency reported.

Meanwhile, local authorities issued a mandatory evacuation order on Thursday for nearly 1.5 million coastal residents in preparation for the hurricane, one of the most powerful storms to hit the region in a decade.

“This storm will kill you. We don’t have much time left,” said Florida Governor Rick Scott at a press conference.

According to the US National Hurricane Center in Miami, Florida, Hurricane Matthew remained a Category 3 hurricane as of Thursday morning.

There is still possibility that it would evolve into a Category 4 storm in approaching the east coast ofFlorida, said the Center.