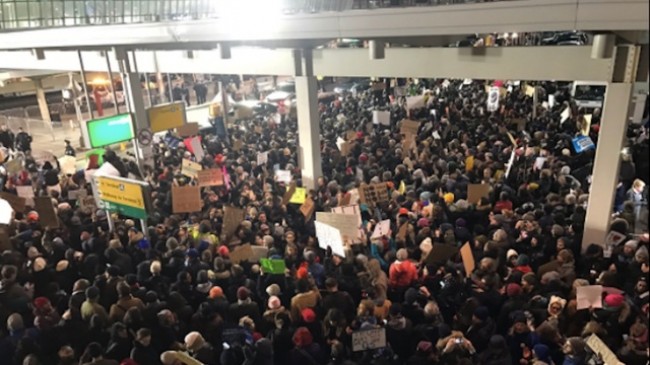 Washington, Jan 29 (IANS)Thousands of demonstrators gathered at airports across the US against President Donald Trump’s “Muslim ban”.

A federal court for the Eastern District in New York later on Saturday issued the order preventing the government from sending immigrants back to their home countries as it would cause them “irreparable harm”.

The demonstrators came out on Saturday night to protest against the executive order of Friday that bans citizens from seven Muslim-majority countries from entering the US.

According to the “extreme vetting”, refugees from Iran, Iraq, Syria, Somalia, Libya, Sudan and Yemen were banned from entering the US for 90 days, citizens from Syria were indefinitely banned and the application of all refugees to the US was suspended for 120 days.

Thousands of demonstrators gathered at the international terminal of Chicago’s O’Hare airport on Saturday night to protest against the order.

Their number kept growing until over 1,000 of them blocked the driveway outside the terminal, Xinhua news agency reported.

The crowd chanted slogans like “Let them in” and “No hate, no fear, refugees are welcome here” and held placards “Do the right thing, let them in”, “Stop profiling Muslims” and “Refugees Welcome”.

Police and law enforcement members present at the scene did not intervene.

They blocked Terminal 4 after immigration authorities detained 11 refugees, who were likely already in transit when Trump ordered the ban.

Hundreds gathered at Washington’s Dulles Airport. The crowd got so big that the airport officials kept expanding the protest zone.

Chants of “Refugees welcome” and “No ban, no wall” echoed outside the airport.

About 300 protesters gathered at Los Angeles International Airport to demonstrate solidarity with Muslim immigrants and refugees detained under the ban.

Chanting “Trump has to go”, “No Trump, No KKK, No Fascism in USA” and other slogans, the crowd called on people to defy the order.

At least seven foreign nationals have been detained at Los Angeles and told they were no longer welcome, the Los Angeles Times reported.

The protesters’ demand was echoed by Los Angeles Mayor Eric Garcetti, who tweeted: “Los Angels will always be a place of refuge.”

In Denver, Colorado, dozens gathered outside the international airport to show support for refugees.

A rally was staged as some immigrants have reportedly been held at the airport.

Brin said: “I am here because I am a refugee.” He was attending the protest “in a personal capacity”, The Verge reported.

Brin’s family emigrated from the Soviet Union to the US in 1979 to escape Jewish persecution.

Google’s CEO Sundar Pichai, also an immigrant, said: “We’re upset about the impact of this order.”

Lara Kiswani, an organiser with the Arab Resource and Organising Centre, said: “What we’re not clear about is who or what type of families are being held, whether they’re from Syria or Iran or other countries, we don’t know for certain.”

San Francisco harbours the highest density of high-tech businesses. Google and Apple, among other tech giants, have expressed serious concerns.

Earlier in the afternoon, several local groups called for an “emergency solidarity rally” in response to Trump’s order.

The measure has triggered confusion and chaos across the country and drawn concern and criticism from across the world.