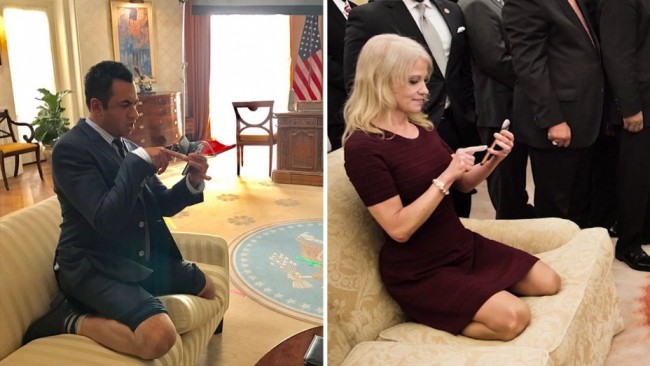 Penn in a tweet on Thursday posted an image of him sitting on a couch similar to the one in the Oval Office, mimicking Trump’s senior counsellor’s weird pose earlier this week.

With his pants hitched up to his knees, Penn knelt on the couch, with his phone in his hand and a confused look on his face. The picture, which has been liked on Twitter more than 4,500 times, was posted with the caption “Kal-E-Anne”.

Conway was subjected to social media outlash after she was photographed checking her phone and kneeling on the couch with her shoes on while President Donald Trump was meeting leaders of historically black colleges and universities in the Oval Office on Monday.

Conway later said that she “meant no disrespect”, and blamed the reporter for taking the picture and wobbling up the issue just to create a sensation, American Bazaar online reported.

“I was being asked to take a picture in a crowded room with the press of us. I was asked to take a certain angle and was doing exactly that. I certainly meant no disrespect, I didn’t mean to have my feet on the couch,” she said on Fox Business Network’s Lou Dobbs Tonight on Tuesday.

“If we started the trend here, where people are outwardly talking about greater respect for the Office of the President and its current occupant, then perhaps that’s something positive that came out. But I, of course, meant no disrespect.”

Kal Penn, born to Indian parents, is an actor, producer, chef and civil servant. He advocated for Barack Obama’s presidential campaign in 2007 and 2008. He served as an Associate Director in the White House Office of Public Engagement from 2009 till 2011.