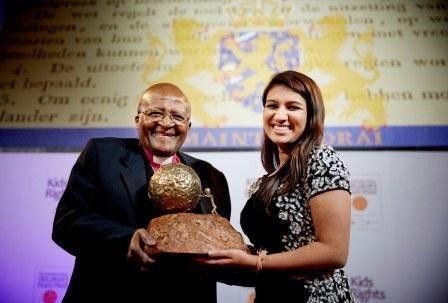 A first-year Schreyer Honours College scholar in the Eberly College of Science at Pennsylvania State University, Gupta will be entering the pre-medicine programme, according to a release from University.

Inspired by what she saw during a visit to India with her grandparents, Gupta founded Empower Orphans, an organization designed to support orphaned and abandoned children in India and the US.

Her work, which she started at age 9, has grown into a charity that to date has raised over $1 million and has helped more than 25,000 children.

The award is widely accepted as the most prestigious international award a young person can win.

Last year’s winner, Malala Youzafzai, a Pakistani activist for female education, went on to become the youngest recipient of the Nobel Peace Prize for 2014.

“Neha’s leadership, vision and work ethic have helped countless orphaned, abandoned and impoverished children, and most remarkably she was just a child herself when she began this work,” said Penn State President Eric Barron.

“We’re very proud that she has been recognized with the 2014 International Peace Prize, and hope that this visibility will inspire others to also pursue worthy endeavours to benefit humankind.”

The International Children’s Peace Prize was created by the Amsterdam-based children’s rights organization, KidsRights, and is awarded to a child whose work and actions have made a significant, positive impact in improving children’s rights worldwide.

While the focus of her work began with orphans in India, Gupta has also helped many families around Philadelphia, where her family lives.

She won numerous awards including the 2011 World of Children Award, the President’s Volunteer Service Award, the Congressional Award, and also the national Prudential Spirit of Community award.

Along with the prize, a 100,000 Euro grant will be given to projects closely associated with Gupta’s area of dedication.