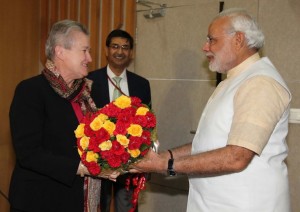 “This was a meeting as part of her broader and the embassy’s broader outreach to a whole host of political actors in India,” State Department spokesperson Marie Harf told reporters Friday “as we’ve said for several days now.” The spokesperson also repeated that the meeting did not indicate a change in US visa policy for the Gujarat chief minister and that the US “will work closely with whatever government the Indian people choose in the upcoming election.”

Harf said it was also “actually not true” that no American officials had previously met Modi since his visa was revoked in 2005 for his alleged complicity in the 2002 Gujarat riots as the current US consul general in Mumbai and previous CGs have met the BJP leader earlier.

Meanwhile the New York Times editorially welcomed the Powell-Modi meeting as a “pragmatic step in engaging with India and the controversial and troubling politician who could well become the next prime minister after elections in May.”

In an editorial titled “More Engagement With India” the Times said Powell’s meeting with Modi “was part of a renewed American effort to reach out to politicians across India’s political spectrum.”

“Such moves are long overdue,” it said suggesting “President Obama has not paid as much attention to India as President George W. Bush, a serious oversight given India’s central role as a democratic anchor in South Asia and its developing relationship with Japan.”

Noting that the India-US “relationship is under serious strains, including a trade dispute over solar panels and a row over a diplomat who was charged with visa fraud,” the daily said: “It is in no one’s interest to let these tensions fester.”

“Regardless of who succeeds Prime Minister Manmohan Singh this year, the United States and India have a lot of work to do to strengthen their partnership,” it said adding, “Opening a door to a relationship with Mr. Modi is a necessary step.”

However, Coalition Against Genocide (CAG), a US-based group that came together after the Gujarat riots, has expressed “disappointment at the hype over the US administration’s outreach to infamous Gujarat Chief Minister Narendra Modi.”

“We do not believe Ms. Powell’s meeting with Modi serves any purpose other than providing the Modi camp some sound bites for use in the election campaign,” said Shaik Ubaid, a CAG spokesperson.