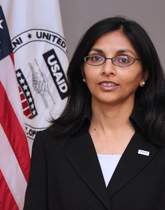 Washington, May 2 (IANS) Describing security cooperation with India as “a central element of the broad US-India strategic partnership”, the US says it looks forward to working closely with the next Indian government to build on it.

India’s “rise as a competent and confidant and capable power that advances regional stability, security and prosperity is something that the United States welcomes and supports,” Nisha Desai Biswal, assistant secretary of state for South and Central Asia told a Congressional panel.

“The US-India relationship has continued to mature, deepen and grow over successive administrations in both countries,” she said in her testimony Wednesday before House Foreign Affairs Committee, Subcommittee on Asia and the Pacific on “Assessing US Foreign Assistance Priorities in South Asia.”

Commenting on “the incredible display of democracy going on in India,” Biswal said, the US continued to facilitate growth in India-US trade relationship and ensure new opportunities for businesses in each other’s markets.

“Our collaboration on energy, science and technology, environment, space, education and counter-terrorism continues to deepen,” she said.

The US was “doubling down, so to speak, in Asia,” Biswal said as the Obama administration has “placed a strategic bet on regional economic connectivity through its New Silk Road and Indo-Pacific economic corridor initiatives.”

“But clearly one of the biggest obstacles to regional connectivity is India and Pakistan,” Biswal said.

Suggesting that “trade normalization between these two historic rivals could be a game-changer,” she said the US has “been encouraged by positive signs from Islamabad and New Delhi that things may be moving in the right direction.”

“We are hopeful that we will see strong leadership from both governments following India’s election,” she said.

Ami Bera, the only Indian-American Congressman and top Democrat on the subcommittee stressed the need to continue to develop the US-India relationship.

“Our policy in Asia is at a critical juncture, and we must reassure our allies and partners that we are committed in the region, particularly India,” said Bera.

“I firmly believe there is potential to quintuple the amount of trade we do, which will ultimately lead to more jobs both here at home and in India.”