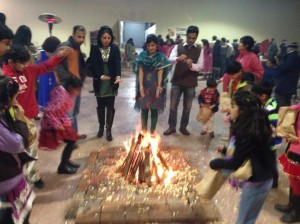 Atlanta, GA: Lohri is a popular festival, celebrated in Punjab, Jammu & Kashmir, Haryana, Himachal and Delhi states of India and now all over the world where people from these states have settled. It usually falls on 13th of January, one day before Makar Sankranti. In Atlanta, it was celebrated with a huge bonfire, beating of drums, music and dancing in Shree Mandir, Mableton.

Reoris (sesame candies), Moongphali (unpeeled peanuts) and Makki Phoolas (popcorn) were provided by Shree Mandir.   In India young children go from door to door collecting above items from the neighbors (a similarity to Halloween tricks a treat). As is done in India, participants also sang Lohri song in praise of Dulla Bhatti. Lots of people including young, old and children dressed up in traditional Punjabi dresses participated in dancing and singing. Udupi restaurant of Smyrna had put up food stalls in Shree Mandir. People enjoyed eating Chana Bhatooras, Dosas, Idlis and hot tea.

The main theme of Lohri is the belief that Lohri is the cultural celebration of the winter solstice.  A key feature of Lohri is the bonfire. Lighting of the fire has been common in winter solstice festivals throughout the world: it signifies the return of longer days.  Lohri is a festival dedicated to the end of the winter season and,  is traditionally associated with the harvest of the rabbi (winter) crops.  North Indian farmers also celebrate the day after Lohri, Makar Sankranti in a big way. Makar Sankranti was also celebrated in Shree Mandir in the same way.

Over time, people have associated Lohri to the tale of Dulla Bhatti (Abdullah Bhatti, a Muslim Rajput).  The central theme of many Lohri songs is the legend of Dulla Bhatti, who lived in Punjab during the reign of Mughal Emperor Akbar. He was regarded as a hero in Punjab. Besides robbing the rich, he rescued poor Punjabi girls, being forcibly taken to be sold in slave market of the Middle East. He arranged their marriages to boys of their religion with rituals and provided them with dowries. Amongst them was a Hindu girl Sunder Mundari who gradually became theme of Punjabi folklore. So every other Lohri song has words to express gratitude to Dulla Bhatti “Robin hood of Punjab”, who led a rebellion against the Mughal rule.