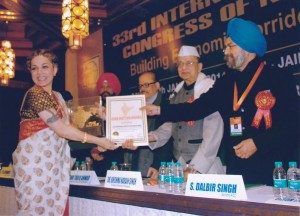 Atlanta, GA: Adrita Khanna a resident of Atlanta, GA was recently awarded the coveted Hind Rattan 2014 award by the NRI Welfare Society of India, whose current convener is Deepak Singh, in a ceremony held on the eve of Republic Day in New Delhi, India.

Adrita received the award from Honorable Tariq Anwar – Minister of State for Agriculture and Food Processing of the Government of India and general secretary of the Nationalist Congress Party of India who was the Chief Guest and along with many other dignitaries from the Government of India such as Shri Dalbir Singh – National Secretary All India Congress Committee, Dr Shakeel-Uz-Zaman Ansari – Secretary All India Congress Committee and Chairman National Minority Forum and Shri Gurinder Singh – the Secretary General of the NRI Welfare Society graced the occasion with his presence. 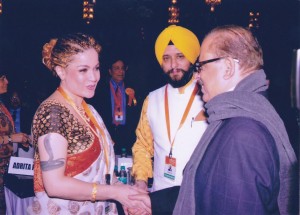 Adrita was also invited to view the Republic Day Parade as part of the felicitation.

Having worked in the hospitality industry in India, Switzerland and US, Adrita understands and is an expert in customer service. She is now active in giving back to the society and promotes family values and showcases the achievements of married Indian women from around the world through her pageants – Mrs. India International and Mrs. Pakistan International. Adrita has been involved with pageants since 2008 when she participated and won the Mrs. India International title for 2008. She became director of the event and since 2010 has been organizing the year round activities for the pageant which culminate in a grand finale where the Queen for the
year is selected. The pageant is associated with the world famous and the longest running pageant for married women – Mrs. International which is
now in its 27th year.
Adrita has also been involved with World Vision charity for many years. She has utilized her skills in her 10 years in the US to promote Indian culture amongst the children and youth of Indian origin. Adrita has a passion for acting and has participated in a variety of stage plays, web television and main stream cinema in both India and USA.

Her acting in various stage plays in the USA has earned her critical recognition. She is currently acting in some mainstream Indian movies.