Following the aarti was the most awaited program of the evening – the entertainment. The association always strives to put together an eclectic offering of songs and dances across genders, genres and ages, built around a couple of long skits. There were Bollywood dances by not only children, but a medley by ladies that was so well choreographed that it could well attract the attention of talent scouts for the next movie!

The skits in Konkani were across timelines: from a present day setting for social media shenanigans to mythical times featuring Lord Vishnu and Goddess Lakshmi! ‘Social Media Samsaaru’, written by resident playwright Banur Nageshrao featured a family constantly on their devices, with such endearing characters as Facebook Ponni and Twitter Tara.  The highlight of the skit was the flawless delivery of lines in pure Konkani by kids, none older than 10 years. The language seemed to be in good hands as it gets passed down to the next generation! Another short skit, ‘GGGG’ (appropriately with five characters with names starting with ‘P’) mined the age-old theme of husbands partying absent their wives, with many a rib-tickling situation – mostly the wives’ re-entry –  written and directed again by Banur. The curtain closer was a long skit, ‘Thatatsu Thatatsu’, written and directed by the husband-wife team, Sanjay and Radhika Rao. The dialog was riddled with puns and one-liners that were lapped up by the audience. The period costumes and props for the gods –  and mortals alike –  were remarkable.

Post dinner – delectable fare that was catered through Persis Indian Grill – it was time to name the committee for the following year. It is testimony to the enthusiasm and sense of belonging to community that there many volunteers who stepped up to serve on various committees. When it was over, it looked like there were more people on stage than in the audience! Newcomers to the community – recent transplants to theAtlantaarea – were especially enthusiastic to serve, as planning, preparations for and participation in such events gives everyone a chance to get to know one another better. 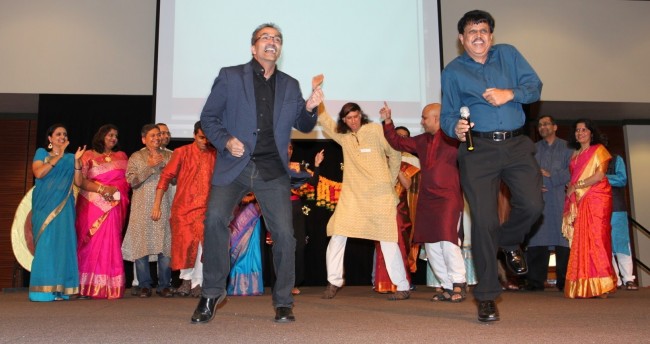 The KAOG was formed in 2000, when a few families who have been meeting informally decided to form an association. Member events typically occur three times a year – Yugadi celebrations in March/April, a summer picnic in an outdoor setting, and Diwali celebrations in October/November. There are about 60 active families in theAtlantametro area, and the few families strewn acrossGeorgiawho enthusiastically make the trip for each of the events. The Diwali program is the grand finale, capping off the years’ events, and occasion to showcase the talents of the community, and encourage participation. This year’s celebration capped off a year of successful events with tremendous participation at all levels, setting off a positive vibe for 2018.