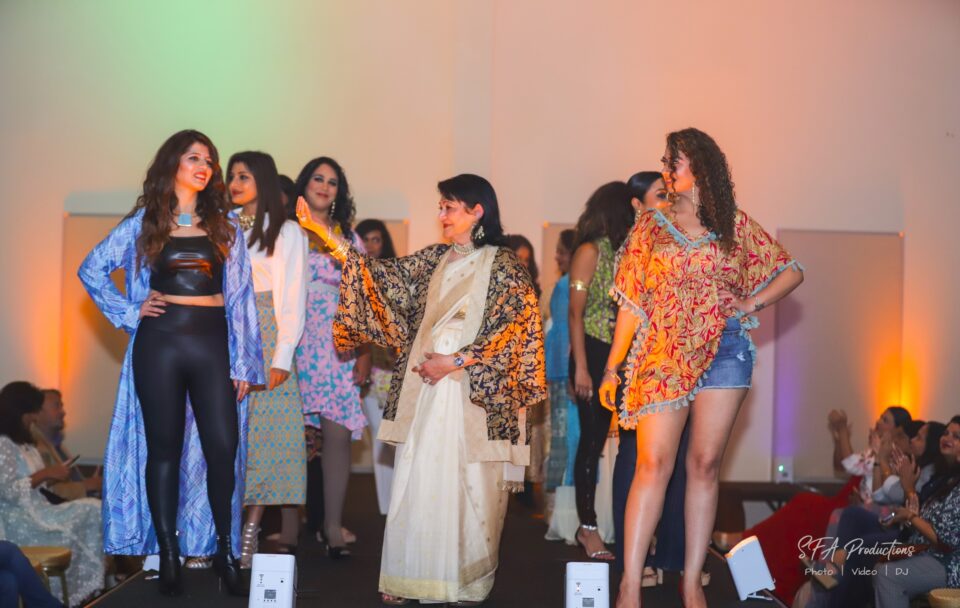 Atlanta, GA, November 8, 2022: Toe-tapping Bollywood mashups filled the air as women networked over savory appetizers and sipped masala chai at the elegant, chandeliered Abhira Ballroom at Sankranti in John’s Creek, GA a few days after Diwali. Lights dimmed to watch a powerful video about lives that are being transformed in India by upcycling discarded saris with rips or minor flaws. Then, a handful of glowing, stylishly attired women sauntered in one by one through the rear entrance of the grand ballroom, stunning a full house of invited guests. The women struck a pose in the candle-lit room, then began weaving around tables with seated women (and men) in steady cadence with upbeat techno fusion beats joining ten other Atlanta-area women, who crisscrossed from the opposite end of the ballroom onto the lighted catwalk, to emerge through the fog to unveil upcycled haute couture clothing. Dekh! Ecco Bellissima!

The female empowerment fashion show and pop-up event was organized during Domestic Violence Awareness month to raise money for the Saris to Suits (R) Purple Lotus legal fund, which launched just as the pandemic forced people worldwide to shelter in place in 2020. The goal is to make the fund available to women and children in need in January 2023.

The show’s mission was also to show that circular economy is chic, our environment is to be revered; and there are second chances for women’s empowerment and for sari fabric.

Hosted by the organization’s board member Veena Rao, who wore a flowing kaftan with a Gucci Equilibrium embroidery touch around the neckline, the event brought together several women of South Asian origin who are leaders in their fields and communities. The first-of-its-kind fundraiser saw an outpouring of love from the community in the form of sponsorships, donations, and a full house of cheering supporters.

“Saris to Suits® is a charity that empowers women and strives towards social justice,” Rao said in her welcome address. “This is a cause that is close to my heart.  As some of you know, The Saris to Suits® Legal Defense Fund is named after my novel, Purple Lotus, which was released two years ago. Purple Lotus is the story of Tara, an immigrant woman in Atlanta who is trapped in an abusive marriage and must overcome societal pressure and stigma to find her voice and stand up for herself.”

The Saris to Suits® Legal Defense Fund will help victims such as Tara get out of an abusive situation and find their feet. The proceeds from sales and donations will not only help survivors of abuse and sex trafficking, it will also help scores of underprivileged artisans from Mumbai slums who make these beautiful garments from upcycled saris.

The fashion show with a purpose featured sixteen women of all ages, shapes, and sizes who lit up the ramp as they modeled Saris to Suits ®’ one of a kind kaftans, kimonos, bomber jackets, skirts, shirts, robes, pajama sets and accessories—all exclusive high-fashion merchandise upcycled by underprivileged women from Mumbai slums. Some artisans are chosen to train to embroider and stitch with the support of Italian fashion house Gucci’s commitment to reinforce a culture of purpose.

“It had glitz and glamour with sustainable fashion. We went from hosting a trunk show to a choreographed runway event in six weeks showcasing upcycled items for uptown women.  The enthusiasm and support is heart-warming and makes all the work over a decade gratifying,” said Pratibha “Patti” Tripathi, the founder of the tax-exempt nonprofit that was curiously (and even more appropriately) named Saris to Suits® for uplifting women and now vibrant Indian textiles, too.   “We hope to make the experience beautiful and memorable.  Our breathtaking showstopper was Madhu Sheth, the graceful wife of philanthropist and Emory business school professor Dr. Jag Sheth, who matched her magnificent 60-year-old Banarasi silk wedding sari to mark her anniversary and draped our monochromatic kimono/jacket over it.   Simply Wow! It goes to show that reusability is chic and refined.”

As the event emcee, Tripathi herself wore a classy dual-sided blue bomber jacket, silk shirt, matching pleated sari fan earrings with blue-striped white linen trousers made from preused sari fabric in a way as to create a product of higher quality or value than the original.

After her mother’s untimely passing at age 56 in October 2004, Patti Tripath wondered how best she could utilize the vintage seven yards of ornate silk she had left behind to keep their essence and memories close to her heart.  That’s when she thought of transforming her traditional wear into exclusive western designer wear.  The trailblazing broadcast journalist, entrepreneur had launched her charitable organization in Sarasota, FL in 2012 with a calendar campaign of exemplary South Asian role models who “pose for a purpose” which were donated to women and girl organizations for fundraising or gifts.

It was serendipitous when in 2019 she heard of Italian entrepreneur Stefano Funari, who was in the middle of crafting a similar brand called I was a Sari, an eco-friendly lifestyle brand that converts pre-owned saris into contemporary ready-to-wear outfits and much more right in the heart of India.  The two unconventional minds got together and formed a mission-aligned partnership that links East to West through fabrics and textiles. Saris to Suits ®  collaborates with I was a Sari for a bigger cause – gender equity, women’s empowerment, and preserving the planet.

Since 2016, more than one million square meters of saris have been prevented from turning into waste. That’s the equivalent of 800 Olympic sized swimming pools! The brand kicked off by employing 64 underprivileged women in 2017. As of 2021, 176 artisans have been engaged to upcycle 1,68,000 sq meters of fabric selling over 1,50,000 products. Their work has rocketed them to new realities beyond their imaginations – winning international fashion awards, dressing global celebrities and working with top Gucci designers.  In 2022, the Saris to Suits ® social enterprise partner in India is on track to increase by 40% across the board, and American women can join hands with women in India and Europe to do more for women’s empowerment and circular fashion.

In the 2020 “Pose for a Purpose” Saris to Suits ® benefit calendar campaign, Rao was featured with her dear friend Frances M. West, a 97-year-old inspiration.  The calendar signing raised seed money, and Tripathi thought it would be timely and appropriate to name the legal fund Purple Lotus as the book had just been published and was winning accolades.

In her address, Rao paid tribute to West who was a Saris to Suits®  ‘April calendar girl’ at the age of 97 and the keynote speaker in February 2020. West passed six months shy of her planned centennial birthday celebration earlier this year.  Ms. Fancy, as Tripathi and scores of international women who adored her for her kind spirit and wit called her, would have been delighted for a chance to walk the ramp with her trademark red lipstick as a 100-year-old socially-conscious fashionista.

NRI Pulse City News Editor Jyothsna Hegde, who walked the ramp in a cobalt blue versatile two-piece, was a co-organizer of the show.  Her gorgeous matching YinMin blue long-beaded necklace was purchased by an onlooker seated in the audience. All items are shockingly less than $100, with the most expensive being the upcycled couture Bombay bomber jacket.

The glitzy show was choreographed by renowned dancer and dance trainer Prem Rahman. During the runup to the event, the women bonded at several rehearsal sessions at Rahman’s dance studio at Global Mall. Talking to NRI Pulse after the event, Rahman said he was happy to support such a noble cause.

“A very enjoyable and meaningful experience of modeling of upcycled saris into the contemporary fashion garments to support a very worthy cause,” said Madhu Seth, “My congratulations to Patti Tripathi, Veena Rao, Prem Rahman and all the beautiful models who participated wholeheartedly for the show.”

“Walking the ramp for a charitable cause made me happy and gave me a warm, glowing feeling,” said Saris to Suits (R) board member and immigration attorney Bhavya Choudhary who walked the ramp wearing a one-of-a-kind panta pareo.

Classical dance instructor Anupa Thakurta, who flaunted a sought-after partially-pleated, multi-colored skirt, adorned with her own bold jewelry, and white poofy-arm cotton blouse, echoed similar sentiments. “It was a classy, one-of-a-kind show, something I have never been a part of before. It was an amazing experience walking the ramp for a good cause and at the same time meeting lovely new ladies,” she said.

“Very humbled to be of service to women and children which has always been my passion and goal,” Raj Razdan said.

Kavitha Katragadda of Sankranti restaurant, which made available its largest ballroom, and provided the delicious appetizers and chai at the event explained why they came forth to support Saris to Suits ®. ”Sankranti strives to be ‘an ocean in a drop’ (referring to 13th century Persian poet/scholar Rumi’s powerful reminder ‘You are not a drop in the ocean. You are the entire ocean in a drop’)”. The restaurant, which now serves breakfast, lunch and dinner, as well as rents several ballrooms and gathering areas, provides fresh food and space for its customers, and especially the Saris to Suits (R) event to support survivors of domestic violence.

Bhavana Anand of Anand Entertainment and Zuri by Bhavu who has received several modeling offers, declined the request to walk on the ramp. But she supported the event wholeheartedly with a Gold Sponsorship.Her daughter, 14-year-old Parvi spoke about Anand’s Charity, Hunar which teaches tailoring to women who are widows or victims of sexual assault or abuse. Hunar started off with 3 women but has now grown to support over 1000 women, she said. Parvi emphasized the need to speak up for those who cannot do it for themselves and expressed her gratitude for being able to support the event.

“It’s been a great honor and a pleasure to be part of of this great organization. I’m looking forward to many more events such as these,” Zoe Mirza from Gold Sponsor Chugh Law Firm, said.

“We are a non-profit that has made progress for ten years with practically zero overhead and no paid employees, or members of the executive team, thanks to the goodwill of an amazing board and community support,” said Tripathi, who while advocating sustainability and empowerment seeks corporate sponsorships, grants, donations for sustainability of her worthwhile charity with proven track record and data so it can do more by naming an experienced executive director. Saris to Suits ® is forging ahead with conscious efforts to reduce the damage and wastage of nature and its abundant offerings while tending to the latest trends in the world of fashio and in other areas for women’s economic empowerment, girls’ education, culural competency and social justice . Tripathi hopes more Americans will buy into eco-friendly, chic, one-of-a-kind clothing lines and merchandise to empower women in India as well as in the US. If the efforts move you kindly support the cause, please check https://saristosuits.org/