Atlanta, GA, January 10, 2018: Tadka Banquet Hall resonated with grand references to India’s glorious past, its growing present, and a glowing future at a well-attended reception held in honor of Consul General of India in Atlanta, Nagesh Singh. The event was hosted by US Hindu Alliance (USHA) on December 15, 2017, as part of its outreach to the diplomatic community.

Emceed by Pratibha Tripathi, senior media advisor to USHA (and former CNN anchor) and Dr. Sreekala Satheesh, national treasurer of USHA (and a practicing physician), the reception opened with a traditional invocation and a welcome address by Shobha Swamy.

“The reception today is part of our effort to reach out to the broader diplomatic community,” quoted USHA president Gokul Kunnath, who also shared his thoughts on the importance of engaging with the world.  “India occupies a special place in the Hindu heart because of our connection to its ancient civilization,” he said.

Kunnath urged the audience to support USHA in building an effective Hindu voice in America.

“The GDP of India in 1600 AD was estimated at 24.3% of the world economy, the second largest in the world,” stated Dhiru Shah, President Elect of Global Indian Business Council (GIBC) and an Alumni of the London School of Economics. Tracing India’s economic graph through centuries, he pointed out that the country’s share of world income went from 27% in 1700 AD to 3% in 1950, thanks to the ruthless exploitation under British colonial rule. The British also destroyed India’s education system, its agricultural, textile and manufacturing industries, he noted.

Citing acquisition by Tata Motors of two popular British brands, the Jaguar and Land Rover, Dr. Jagdish Sheth asserted his confidence in the emergence ofIndiaas a major economic power. “The next generation of the new middle class that is brand conscious, is the biggest consumer market,” he noted.

“Amazon is massively investing in India. Their voice recognition system is customized with Indian accent and Hindi words to cater to the Indian market. Over 30,000 manufacturers and distributors are supplying their products through Amazon into the US this year,” he said, adding that the supplier and consumer markets were heading to flourishing heights.

Sam Massell, the 90-year-old former Mayor of Atlanta and President of the Buckhead Coalition, in his brief address, said it was pleasure and honor for him and his wife to be at the event, to break bread together, and to feel the warmth and friendship in the audience.

“The concept of Dharma is what sets India apart from every other country in the world,” quoted Bob Arnett, author of the popular book, ‘India Unveiled’ and many children’s books. “The ideas contained in the Vedas, the most ancient sacred writings, offer the solutions for the seemingly insurmountable problems of the world.”

Rajeev Menon, Vice President of Communication for USHA, introduced the Guest of Honor, Consul General Nagesh Singh citing his various accomplishments through the years, including 20 years of distinguished service to India. “His appointments have included being Officer on Special Duty/Joint Secretary to the Vice President of India, Director (Pakistan, Afghanistan, Iran) in the Ministry of External Affairs (MEA), Counselor on Administrative and Budgetary Affairs in the Permanent Mission of India to the UN in New York, Private Secretary to the Minister of State for External Affairs, and Under Secretary (Pakistan) in the MEA. He served for a year in the Embassy of India to Senegal,Cape Verde,Gambia, Guinea Bissau, Mali, and Mauritania, and over three years in the Embassy of India to France,” Menon said. 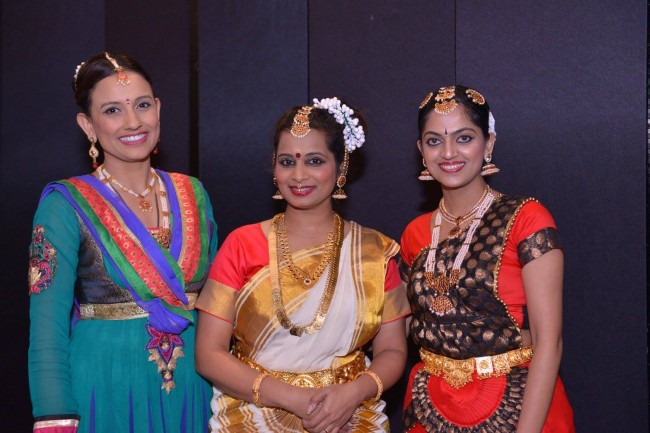 Consul General Nagesh Singh, in his address, stressed on the emergent US-India relations, where investments from both countries in each other have gone up 500% in the last decade. Georgia has 60 Indian companies and not all of them are IT, about 40% are, he said.

“Do you know with which country US carries out most military exercises outside of NATO as an alliance? It is India. And it is not just a buyer-seller relation, it is also co-production, co-development,” he noted.

Consul General Singh said the US now sees India as a force of peace, prosperity and stability in the world.

The Consul General familiarized the audience about the challenges and the accomplishments of India after independence. “India has demonstrated to the world that it can remain a powerful, united democracy and contribute meaningfully to economic progress, peace and prosperity,” he said.

“India does not need your money, it needs your know-how, your connections and the linking of educational institutions,” he added, while congratulating USHA for taking up the initiative to organize the community.

Numerous Hindu organization heads recognized and thanked the Consul General for the amazing work being done by him and his team in the Southeast. All distinguished guests were duly recognized.

Founded in 2001, USHA, the first Hindu advocacy group in America, is a national grass root, non-profit, tax-exempt, advocacy organization of Hindus to protect and promote the interests of Hindus worldwide. For more information, you may contact  contactushaoffice@gmail.com or visit www.ushaonline.org.