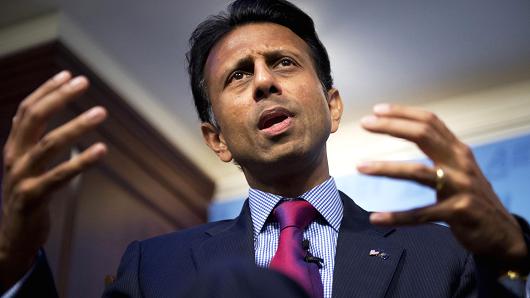 Washington, March 13 (IANS) As he explores a 2016 presidential bid, Louisiana’s Indian-American Governor Bobby Jindal is wooing his Republican Party’s right wing by working hard to prove himself to be what he calls a “full-spectrum conservative”.

Jindal also “endorsed the letter to Iran signed by Republican senators seeking to undercut nuclear talks, and decried Muslim no-go zones’ in Europe that the mayor of London said do not exist”.

A Brown University graduate and Rhodes scholar, Jindal, 43, opposes gay marriage and declines to express belief in the theory of evolution, CNBC noted.

“A child of Indian immigrants, he rejects the idea of ‘hyphenated Americans’ and calls for those of different national origins to fully assimilate as a means of strengthening the American fabric.”

That, he told CNBC, is why he decried Muslim “no-go zones”, which he insists that researchers have documented.

“If we are not careful, if we do not insist on assimilation and integration,” Jindal was quoted as saying, “we will develop those same kind of areas in our country.”

He rejects accusations from Democrats and Republicans alike that he is pandering to conservative primary voters.

“This goes back to the arrogance of the left, the folks that say you can be smart or conservative, you can’t be both,” he was quoted as saying.

“It’s not just the president, it’s not just the liberal media – there are some folks in our party that as soon as they get to Washington they give up trying to fight for their principles.”

“I think it’s confusing for a lot of people to see a guy who went to Brown University and is a conservative,” Jindal was quoted as saying.

“Maybe I’m not what they think a conservative should look like. There’s an arrogance that thinks that everybody that has an education must think a certain way.”

Jindal, who converted to Catholicism as a young adult, told CNBC he’s “praying about” a possible race for the White House and intends to decide by summer.