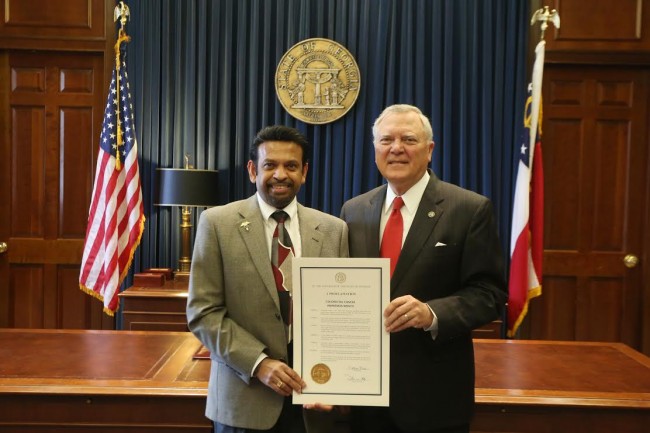 Atlanta,GA: March is considered the Colorectal Cancer Awareness month and many activities and public seminars are held locally and nationally to improve the public awareness of colorectal cancer.

Colorectal cancer is an easily preventable, detectable and treatable malignancy, yet it remains the second leading cause of cancer deaths in the country, including Georgia. Dr Indran Indrakrishnan, a clinical professor of medicine of Emory University School of Medicine and a practicing gastroenterologist in Lawrenceville, made a request to Governor Nathan Deal to declare March 2015 as colorectal cancer awareness month in Georgia. Dr Indrakrishnan, who is also current president of Georgia Association of Physician of Indian Heritage ( GAPI) has a vested interest in the prevention of colorectal cancer. He is on the Board of directors of Fight Colorectal Cancer, a leading national cancer advocacy organization that demands a cure for the second leading cancer killer in the United States.

In addition to the advocacy work, Fight Colorectal Cancer offers support for patients, family members, and care givers. It serves as a resource for colorectal cancer advocates, policy makers, medical professionals and healthcare providers. Dr Indrakrishnan was invited by NASDAQ  March last year to ring the opening bell  to honor the organization and increase the awareness of colorectal cancer among the public.

More than 90% of   colorectal cancer patients can be cured if detected early enough by colonoscopy. The compliance for colon cancer screening by colonoscopy  is poor particularly among Indians , hence it remains the second most common  leading cause of  cancer deaths in the country, said Dr Indrakrishnan. The cancer usually develops from a benign growth called polyp, which grows on the lining of the colon- the large bowel. The polyp, with time grows larger and eventually becomes cancer. The colonoscopy –a painless outpatient procedure done under light anesthesia – can detect and remove these polyps. Colonoscopy  is recommended starting at the age of 50 to everybody as part of the physical  but sooner if any high risks or warning symptoms or signs  are found . These include Rectal bleeding, Change in the bowel habits, Incomplete evacuation of stool, Rectal pain, Abdominal pain, Bloating, Anemia, Feeling of tiredness/ lethargy or family history of colon cancer or personal history of colitis/ Crohn’s disease. Colonoscopy with removal of  polyps by colonoscopy is the key in the prevention of colon cancer.