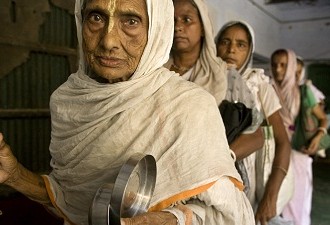 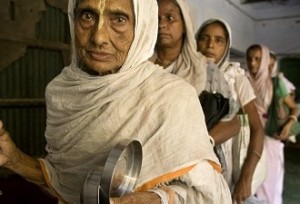 Vrindavan (Uttar Pradesh), Oct 28 (IANS) Thousands of widows of Vrindavan in Uttar Pradesh will, for the first time, celebrate Diwali this year. These women will light diyas and firecrackers too, breaking free of superstition and oppressive tradition.

The widows, a large number of them from West Bengal, were leading a miserable life until the NGO Sulabh International intervened, on the directive of the Supreme Court, to provide them security and improve their living standards.

Many of the widows, abandoned by their families and subject to taboos, often also considered inauspicious, have eked out a bare existence for years, singing songs at the innumerable temples of Vrindavan and living off alms.

Sulabh chief and social reformer Bindeshwar Pathak, speaking to IANS about the preparations for Diwali, said: “The idea is to kindle a ray of happiness in their twilight years through celebrations which will continue for three days in Vrindavan.”

Diwali celebrations for the widows have been organised at the century-old widow shelter “Meerasahabhagni Ashram”. The festivities will begin Oct 31, and continue until Nov 3.

Thousands of earthen lamps (diyas) have been arranged and are being painted by the widows themselves. For the first time, they will light candles or diyas. The widows will also get an opportunity to burst fire-crackers and “phuljadis”. A grand feast will follow the cultural programmes, Sulabh International workers said.

Only recently, some widows from Vrindavan were flown to Kolkata to join the Durga Puja festivities in that city, at pandals put up by various charity organisations.

Early this year, the Vrindavan widows had an opportunity to participate in Holi revelries for the first time in many years.

“These aged women, many of them child widows, were abandoned by their families or fled inhospitable homes. They have faced the brutal realities of life, and finally landed at Vrindavan, which serves for them as a waiting place for death,” Madan Jha, an official of Sulabh, told IANS.

Sulabh International gives a monthly stipend of Rs.2,000 each to the widows living in five shelters in Vrindavan. Their food and healthcare needs are also taken care of by the NGO.

Explaining the vision that motivated him to venture into this area, Pathak told IANS: “Our intention is to bring these helpless women, ostracised by conventional society, back into the mainstream, and sensitise the government and the activists in the field of social work to join the nationwide campaign for the welfare of widows.”

Pathak said he intended to draft a bill and hand it over to parliament to improve the plight of widows abandoned by their families. He urged all political parties to support his initiative.

Sulabh, known the world over for promoting low-cost sanitation, started taking an initiative in the welfare of widows after the Supreme Court took strong exception last year to the manner in which the bodies of widows, who lived in government shelter homes at Vrindavan, were disposed of.

In places like Varanasi and Vrindavan, hundreds of widows lead an isolated life to attain moksha or liberation from the cycle of death and rebirth. Living in small rooms in narrow alleys, they spend most of their time praying and looking for food, in the absence of family support.

“Our NGO is actively participating in preparing a road map to eradicate this age- old practice of ostracism of widows. In fact I always think that widowhood is life imprisonment for these widows. As Chaitanya Maha Prabhu has said, widowhood is not death of the husband, but the long, ‘living death’ of the wife. There should be some social movement to eradicate this practice. That is the reason we have this movement of hope and empowerment for the rehabilitation of these widows,” Pathak said.

“I strongly feel the time has come for the government to enact a law for the welfare, protection and maintenance of widows so that their living conditions and general existence are improved,” Pathak said.