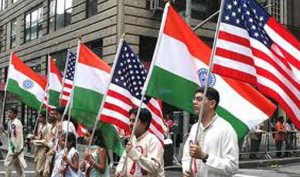 Washington, March 23 (IANS) Overseas wings of the Congress, the Bharatiya Janata Party (BJP) and the Aam Aadmi Party (AAP) are all passionately wooing Indians abroad ahead of India’s parliamentary elections.

The AAP is particularly active in using social media and online campaigns to win the Indian diaspora’s support for what AAP-USA leader Pran Kurup calls a “BIG election” where “India’s future is at stake.”

“Pervasive corruption is the greatest impediment to the growth of the country,” Kurup told IANS in an email.

“Indians living in America understand India’s true potential at a very fundamental level, and it makes them sad to see India not living up to its full potential,” he said.

The Overseas Friends of BJP (OFBJP) is also reaching out to non-resident Indians through social media and phone calls for what its US unit president Chandrakant Patel considers “a historic election”.

Hundreds of BJP supporters are also traveling to India for the campaign as “the voice of NRIs has a greater impact on the people”.

But party president George Abraham acknowledges “there is a lot of apathy” among the people.

Due to “anti-incumbency sentiment”, the “Congress hasn’t been very successful in communicating the accomplishments to the people”, Abraham told IANS.

The Congress is not having any fundraisers as “they are illegal”.

In Abraham’s view, the key issues at stake for Indians abroad are “survival of secularism, potential polarisation of the communities and the handling of global issues like trade, war and peace with maturity”.

Improvising on President Barack Obama’s campaign slogan of “Yes, We Can!”, the AAP is rallying supporters with the catchphrase “Together, We Can!”.

It is calling on supporters to “use your social media, status messages and mail signatures to create awareness about the party’s ideologies”.

Kurup describes “the emergence of the AAP as a credible alternative (that) offers us hope and an opportunity to move in the right direction”.

Its volunteer teams across the world, he said, meet and discuss various issues, and attend local events to spread the party’s message and sign up new volunteers.

As only Indian citizens can contribute, Kurup said “the conventional fund raising events in the US are rare”.

“We focus instead on raising online donations through creative email messages, social media campaigns, Google hangouts.” He says the people’s response to the AAP campaign is “phenomenal”.

Indian techies in the US have built what they call a “game changer” “Next Generation” technology platform to raise online donations for AAP.

“People are stepping up from all parts of the globe offering to help!” Kurup said.

“We have a global team of volunteers contributing in so many different ways.”

Watching the Indian elections with great interest along with the Indian community are various think tanks, community bodies and trade groups.

So, you are an NRI who cannot travel to India: What can you do to help loved ones deal with COVID?

Most Common Travel Mistakes And Tips To Avoid Them