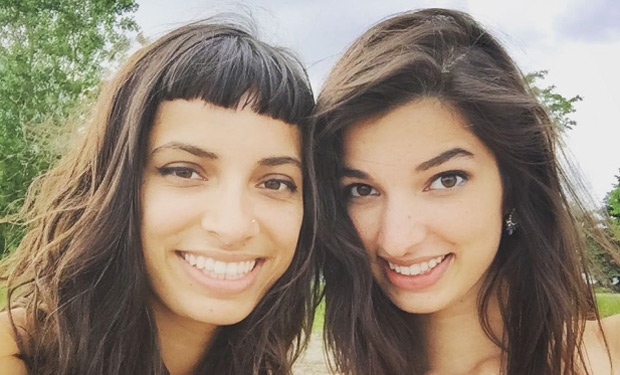 Alysha Brilla (left) with one of her sisters.

Washington, Aug 3 (IANS) An Indo-Tanzanian-Canadian jazz singer, Alysha Brilla, led hundreds of topless women in a rally organised in Ontario to advocate women’s right to be topless in Canada, a media report said.

Alysha Brilla’s two sisters, Tameera and Nadia, joined her to raise awareness about the issue in a peaceful “Bare With Us” protest, RT.com reported on Sunday.

“It was really well attended and the people who came were very supportive. I had no idea how polarizing the issue would be. I thought people would not be so disturbed by the female breast. We just want to advocate and let people know that they do have this right,” Alysha was quoted as saying.

They carried slogans of “They feed you, they breed you, but they sure as hell don’t need you” through the streets.

Another one read: “They are boobs, not bombs, chill out.”

Police in Canada allegedly stopped the three sisters for cycling topless a week ago in Kitchener city of Ontario.

A male police officer who asked them to cover up to comply with the law was told that women in Ontario had the right to go topless in public since 1996.

As Brilla started recording their conversation on her phone, the policeman changed his stance, and said he stopped to check if their bikes had proper bells and lights for safety.

In 1996, the Ontario Court of Appeal stated there was “nothing degrading or dehumanising” about going topless in public.

A writer's job is not to make tourist brochure of India: Booker prize nominee Anuradha Roy