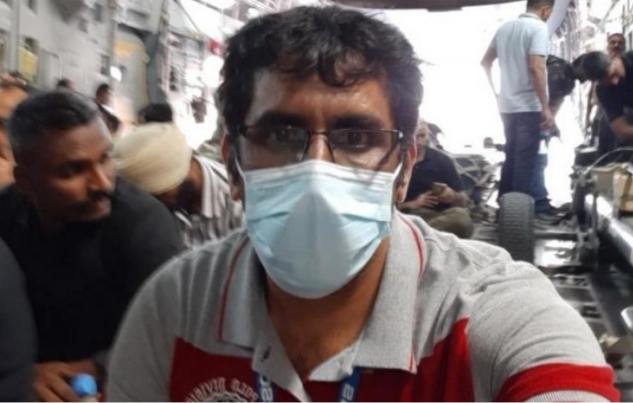 Bengaluru, Aug 19 (IANS) After the Taliban took over Afghanistan, Melvin, a resident of Ullal in Karnataka’s Mangaluru and working as a technician at a hospital in Kabul, has safely returned to his homeland amid all the chaos there.

Melvin recounted the horrors he encountered in Afghanistan, after his return on Wednesday.

“We were stranded in the Kabul airport for two days without food. I was lucky and could board the direct flight to India as my workplace was in the close vicinity of the airport. There was a mad rush at the airport after flights landed during nights,” he explained.

Indians boarded onto different flights headed for different destinations like London, Dubai and Norway. Many Indians have landed in foreign countries and are quarantined there, he said.

“My brother, who also worked in Afghanistan, could not get a direct flight to India. I could speak to him twice and he informed me that he is on a flight heading to Qatar,” he said.

“I was picked up by a C-17 Globemaster flight on August 16. I reached Jamnagar base in Gujarat. From there I went to New Delhi and reached my home town,” he said.

Many from Mangaluru are stuck in Afghanistan. The Indian Air Force is struggling hard to bring all of them back to the country and different companies are also joining hands to shift their employees out of Kabul, he stated.

“The situation in Kabul is chaotic. My workplace was a secure place and I was not subjected to horrific things that people were subjected to outside. I was there for years and did not face any challenges like this one. Nothing could be said about what is going to happen in Afghanistan. The withdrawal of the American army allowed the Taliban a free run,” he said.

“Local Afghans who worked with us were not allowed to go to their homes due to Corona and they stayed back at the workplace. Now, in the changed situation there is a problem with food already,” Melvin says.

Meanwhile, the family members of two religious preachers who got stuck in Afghanistan are worried over their safety. Father Jerome Sequera from Mangaluru and Father Robert Rodriguez from Teerthahalli in Shivmogga district have told their families over the phone that they are presently in a safe location. They said they were trying to reach Kabul international airport.

Gerome Sequera is working as the head of an international NGO in Kabul. He has spoken to his brother Vincent Sequera and informed him that he has moved to a nearby safe place from Kabul. His family members are coordinating with authorities to bring them back to India.

Gerome told his family that he tried to get into Kabul airport on Sunday. But, the Taliban took over the airport by then and it was chaos after that. The Taliban controlled the mad rush and people were allowed to board flights without any security checks.

Meanwhile, the Karnataka government has appointed a nodal officer to coordinate with the Centre in bringing back the people from the state stuck in Afghanistan.

Additional DGP (CID) Umesh Kumar has been appointed as the nodal officer and a helpline (080 2209 4498) is also announced for the people to seek help. The people have been requested to provide all information regarding their relatives stuck in Afghanistan.