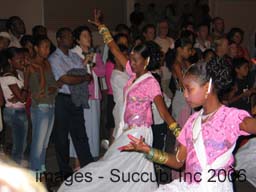 New Delhi, Jan 8 (IANS) French is their mother tongue and they have been born and lived for four generations far away from India, but a thirst to know more about the land where their forefathers came from draws them to India regularly.

Armoudom Lena, an orthodontist from Reunion Island, is heading the Indian delegation at the 12th Pravasi Bharatiya Divas, the largest gathering of Indian diaspora that opened here Tuesday.

Reunion Island is a small French island in the Indian Ocean, near Mauritius. The Indian-origin population comprises 45 percent of the people on the island that has a population of over 837,000 inhabitants.

“We are the most important Indian community in France,” Lena told IANS in an interview here.

Lena, who has come with her son and other Indian members, said the visit to PBD is aimed to help strengthen links with “Mother India”.

“We want the young people to strengthen links with Mother India and our country of adoption. We want to share our experiences from abroad.”

“France is a country of human rights and we have good education. I think we can share our experiences,” said Lena, adding that they are also keen to find out about investing in India.

“There are many people who can invest in India in fields like environment and recycling of water,” said Lena, a fourth generation Indian.

Among the problems Lena said she faces while in India is language, as they are French speaking with halting knowledge of English. The other is of passports for Persons of Indian Origin (PIOs), she said.

Asked which part of India her forefathers hailed from, Lena said she was told by an Indian minister that “maybe I come from Kerala. I am the fourth generation immigrant”.

Her son Sanjay Armoudom is studying law. Sanjay said he wants to meet more youth in India, including more from the Indian diaspora.

“In India we share the same facial features, not like where I grew up. I feel familiar here, and also a little lost,” said Sanjay.

It is his third visit to India and every time he comes to India a little of that lost feeling dissipates.

“The more I come the less I feel lost,” said Sanjay, adding he would like to invest in India sometime in the future after he gets a job.