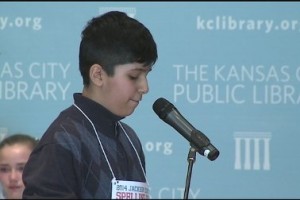 Washington, March 9 (IANS) After a two-week 90-round gruelling battle, a 13-year-old Indian American student Kush Sharma finally broke a tie in a local county contest to go to the National Spelling Bee competition.

The Indian champ Saturday faced his 11-year-old adversary Sophia Hoffman again to resume the Jackson County Spelling Bee in Kansas City, Missouri, that had ended in a tie Feb 22 when the judges ran out of words.

The two had eliminated 23 other contestants and went another 47 rounds against each other in their previous encounter, according to Kansas City Star.

But in the end, in the 29th round Saturday Kush, a seventh-grader from Kansas City, won with not a tongue twister but a simple word – “definition” after Sophia, a Lee’s Summit fifth-grader too stumbled on her word – “stifling” – in Round 28.

After an appeal, a judges’ huddling to review a recording and then a break, “Kush stepped to the microphone in the bone quiet of Helzberg Auditorium at the Kansas City Central Library”, as the Star recounted.

After nailing earlier killer words like “hemerocallis”, and “jacamar”, Kush spelled “definition” after first, of course, asking for its definition.

“Behind him, Sophia was first to clap, happy for the friend she got to know in passing 75 times back and forth to the microphone,” Star said.

“Kush, a polite young man, patiently gave the moderator a handshake before hurriedly going to Sophia. They hugged,” the newspaper said.

Minutes later, Sophia said: “It was a great experience and I’m happy for Kush.” She added she would be back next year.

In their previous epic battle, the two had traded “madeleine” for “scherzo”, “mukhtar” for “bobbejaan”, and on and on for more than five hours before the judges ran out of words resulting in a rare tie.

But Scripps officials rejected a groundswell push on Twitter to “Send Them Both!” to the nationals in Washington D.C. in May.

In Saturday’s contest, neither skipped a beat until Sophia’s miss in Round 28. During the ensuing break, she gathered with her family, and Kush saw Sophia crying.

He walked over and bent to her. “Stop crying or you’re going to make me cry,” he told her, according to the Star. She looked up and laughed.