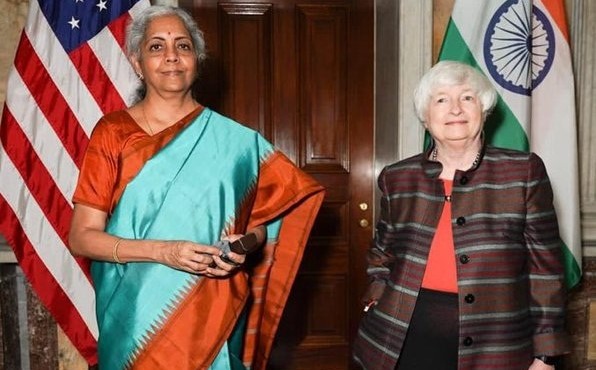 New York, Oct 15 (IANS) India and the US have said they would reinvigorate action against terrorism-financing, tax evasion and money laundering after a high-level meeting on economic and financial partnership led by Finance Minister Nirmala Sitharaman and Treasury Secretary Janet Yellen.

“We continue to strengthen our cooperation in tackling money laundering and combating the financing of terrorism through increased information sharing and coordination,” they said in a joint statement after the Eighth US-India Economic and Financial Partnership (USIEFP) meeting on Thursday in Washington, which was also attended by Federal Reserve Chair Jerome Powell and Reserve Bank of India Governor Shaktikanta Das.

The meeting of the financial chiefs was the latest in a series of consultations by leaders of the two countries before and after last month’s summit of Prime Minister Narendra Modi and President Joe Biden as New Delhi and Washington draw closer.

Leaders in defence and foreign affairs have met in the two countries in recent weeks.

In thier joint statement, Sitharaman and Yellen stressed “the importance of fighting financial crimes and on the effective implementation of the Financial Action Task Force (FATF) standards to protect our financial systems from abuse”.

Among the countries that it monitors for the financing of terrorists is Pakistan, which it has placed on its grey list of nations with lax controls on or inadequate safeguards against terrorists getting funds, but the joint statement made no mention of Islamabad.

They also took up the issue of tax avoidance by multinational companies, which is not necessarily illegal but results in revenue losses for some countries because others have low corporate tax levels to attract companies to situate themselves there.

India and the US would work together for the early adoption of last month’s agreement by the G20 grouping of major economies on taxing multinational corporations, they said.

They called it a “significant accomplishment for updating the international tax architecture” to make it “more stable, fairer, and fit for purpose for the 21st century”.

“We should work together and with other partners at the technical level in order to expeditiously implement Pillars 1 and 2 by 2023,” they said referring to two of the elements in the agreement on taxation agreed to by 136 countries last month.

Pillar 1 would allow the countries where large multinationals earn their profits and have business activities to tax them and Pillar 2 WILLset a minimum corporate tax rate of 15 per cent.

The US and Indian finance chiefs said they would continue to discuss having a full reciprocal arrangement for an Inter-Governmental Agreement under the Foreign Account Tax Compliance Act (FATCA) that would require individuals and financial institutions having account holdings in the other country to report them to tax authorities in both countries.

With Biden’s high priority for action against global warming, Sitharaman and Yellen’s climate finance was the highlight of their meeting “reflecting our respective commitments to driving urgent progress in combatting climate change and the critical role of climate finance in achieving this shared global goal”.

They said that that they “reaffirmed the collective developed country goal to mobilise $100 billion annually for developing countries from public and private sources” for climate change mitigation actions.

“We are continuing our successful collaboration on attracting more private sector capital to finance India’s infrastructure needs, which will support growth in both countries.”