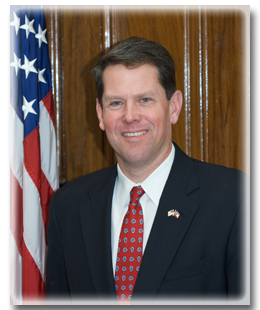 “On behalf of the Republican Secretaries of State Committee, I’d like to congratulate incoming Texas Secretary Nandita Berry on her appointment and welcome her to the RSSC’s outstanding group of leaders working to protect election integrity nationwide,” said Kemp. “Nandita’s strong personal narrative of hard work and achievement coupled with her record of success in Houston will serve the Lone Star State well.” Nandita Berry’s appointment makes her the first Indian-American SOS in Texas history and the 8th Republican woman SOS in the nation.

Kemp noted Nandita’s background and commitment to civic service in Houston makes her a strong candidate for additional leadership opportunities within the Future Majority Project and Right Women, Right Now – a joint $6 million initiative of the Republican State Leadership Committee to recruit, train and support 200 new diverse candidates and 300 new women candidates to run for first time office through 2014.

The Republican State Leadership Committee (RSLC) is the largest caucus of Republican state leaders in the country and the only national organization whose mission is to elect down-ballot, state-level Republican officeholders. Since 2002, the RSLC has been working to elect candidates to the office of lieutenant governor, attorney general, secretary of state and state legislator. The RSLC has more than 100,000 donors in all 50 states. In the 2011-2012 election cycle, the RSLC invested in 42 states, breaking previous fundraising and political spending records, set in 2009-2010, with an increase in fundraising by 28 percent to $39 million and an increase in direct political spending by 35 percent to $27 million. This cycle’s effort picked up six new legislative chambers, saw a net gain in over 30 chambers, created or expanded 16 Republican supermajorities and picked up two new attorneys general. Additionally, the RSLC successfully launched the Future Majority Project, spending more than $5 million in direct support of Republican candidates of Hispanic descent and women, and investing to expand digital outreach efforts to millennial voters.

Hindu population up in the US, becomes fourth-largest faith