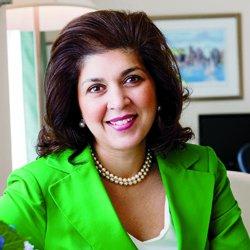 Washington, Jan 24 (IANS) Indian-American Farah Pandith, the first-ever US special representative to Muslim communities, is leaving her position at the State Department to join the Institute of Politics at Harvard University.

Appointed to the position in June 2009 by former Secretary of State Hillary Clinton, Pandith “always places people above politics, and she has performed groundbreaking work,” said Secretary of State John Kerry in a statement Thursday.

Originally from Srinagar, Pandith will be joining the Institute of Politics as a resident fellow for the spring semester. She will lead weekly study groups on a range of topics.

Pandith has a master’s degree from The Fletcher School of Law and Diplomacy at Tufts University, Boston, Massachusetts, and an AB from Smith College Pandith’s deputy, Adnan Kifayat, will serve as the acting special representative until a permanent replacement is named.

Describing Pandith as a “trailblazer and a visionary,” Kerry said “Farah’s legacy is an extraordinary record of thoughtfulness, balance, and sheer guts and determination.”

“For Farah, this isn’t just a career. It’s her life’s passion,” he said.

“It’s in her DNA as a first-generation immigrant who achieved historic firsts for America, from changing the way our Embassies engage with Muslim communities in Europe to getting a Quran placed in the White House Library.”

She travelled to more than 80 countries and launched critically important youth programmes, including Generation Change, Viral Peace, and the Hours Against Hate campaign, Kerry noted Pandith’s career in public service has taken her from Chief of Staff of the Bureau for Asia and the Near East at USAID to Director for Middle East Regional Initiatives at the National Security Council to Senior Advisor to the Assistant Secretary of State for European and Eurasian Affairs.