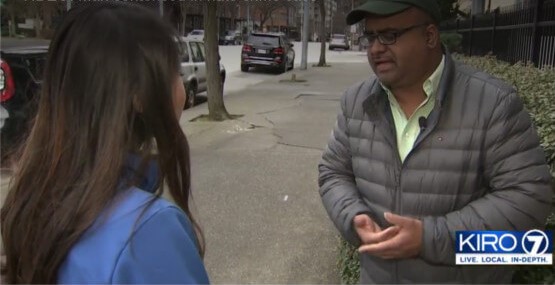 Atlanta, GA, March 24, 2019: A Seattle, Washington man who brutally beat and tried to strangulate Indian-American Sandeep Ray, was sentenced to 5 years in prison for the hate crime.

According to KIRO TV, the victim, Sandeep Ray told the court how he was nearly killed by William Kraft on September 8, 2017. “I almost lost my life that night, I almost got murdered. I was left for dead, night terrors haunt me now in my sleep. There were times I even wished William Kraft had finished me off, as the pain was the worst and intolerable.”

On September 8, 2017, Kraft attacked Ray in a Kirkland Safeway parking lot. The two had no prior relation before the incident and the police deemed it a random attack.

Kraft brutally beat Ray, punching him, kicking him in the head when he was down, and strangling him till he passed out. Kraft then took off his shirt to strangle Ray, then used his hands. The attack was stopped by a bystander who passed by. During the attack, Kraft repeatedly called Ray “blackie” and asked him when he was going to leave the country. After the beating, Kraft stole Ray’s pizza.

Speaking to KIRO TV, Ray said, “He told me, ‘Hey blackie, when are you going to leave this country?’ When he was punching me he was asking, ‘hey, hey blackie, is it enough, do you learn your lesson?’”

Kraft apologized to Ray for the attack in court. “I wake up every day and it just doesn’t seem real. So I’d like to very sincerely apologize to Mr. Ray,” he said.

Kraft’s mother, Lisa Kraft told the court that Kraft suffered from mental illness and abuse at a young age. “He has had mental illness and he’s tried to self-medicate with drugs. And also the abuse was mentioned when he was younger,” she said.

William Kraft got the maximum sentence for the charges levied against him. He was charged with misdemeanor theft, malicious harassment and assault.

“It was an act of terror. So I’m going to follow the state’s recommendation.”