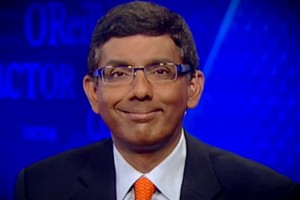 Washington, Jan 24 (IANS) Indian-American filmmaker Dinesh D’Souza, whose documentary “2016: Obama’s America” took a critical look at President Barack Obama, has been indicted on charges of using straw donors to illegally donate to a 2012 Senate campaign. And the man charging him is none other than Indian-American attorney Preet Bharara.

Conservative commentator and author D’Souza allegedly made and arranged $20,000 in campaign donations to an unnamed campaign in 2012 and then reimbursed those who were directed to make contributions, according to the indictment by a federal grand jury in New York City.

D’Souza, 52, is expected to be arraigned in Manhattan federal court on Friday.

“As we have long said, this Office and the FBI take a zero tolerance approach to corruption of the electoral process,” Preet Bharara, Indian-American US Attorney for the Southern District of New York, said in a statement.

“If, as alleged, the defendant directed others to make contributions to a Senate campaign and reimbursed them, that is a serious violation of federal campaign finance laws.”

D’Souza attorney Benjamin Brafman said in a statement the indictment does not allege a corrupt relationship between his client and the candidate. “Simply put, there was no ‘quid pro quo’ in this case, nor was there even any knowledge by the candidate that campaign finance rules may have been violated. D’Souza did not act with any corrupt or criminal intent whatsoever,” Brafman said.

“He and the candidate have been friends since their college days, and at worst, this was an act of misguided friendship by D’Souza,” he added.

D’Souza’s 2012 documentary on Obama which proved a surprise hit was based on his book “The Roots of Obama’s Rage.”

He also worked in President Ronald Reagan’s White House and for the American Enterprise Institute and the Hoover Institution, conservative research centres.

D’Souza has written more than a dozen books, on subjects such as terrorism, American values and Christianity. He has announced plans for a new movie this year, titled “America.”