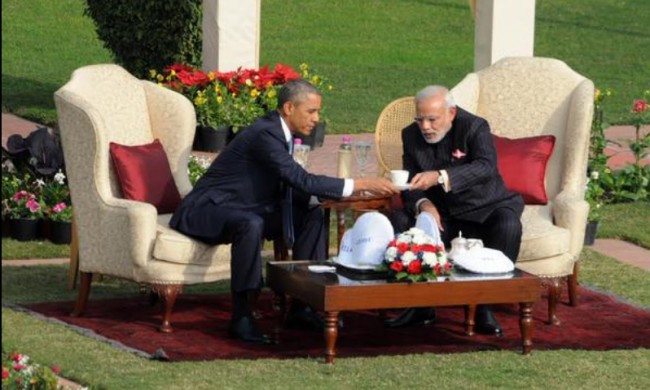 New Delhi, Jan 25 (IANS) Prime Minister Narendra Modi and US President Barack Obama had a private tete-e-tete over tea at Hyderabad House, the state guest house, that led the latter to invoke the ‘chai pe charcha’ (chat over tea) concept that Modi made a winning campaign strategy before the April-May 2014 general election that he won with a stunning majority to come to power.The two leaders stepped out into the garden of the stately Hyderabad House, a formerly princely mansion that was built in 1928, and has been the venue for high-level official meetings and summit talks, after a working lunch, and leisurely strolled along the red sandstone pathways, talking animatedly and gesticulating for effect.

Hyderabad House is part of the India Gate complex at the centre of the capital through which will pass the Republic Day parade Monday where Obama is the chief guest.

Their body language, at the informal retreat, made it clear that the chemistry that had developed between them during Modi’s visit to Washington has grown even stronger.

They sat down on two comfortable single-seater sofa chairs laid down in the Hyderabad House garden, under a curtained canopy, and Modi picked up a teapot, lifted a white cup and saucer, poured out the tea and handed it over to Obama without a break in the conversation.

They chatted for more than 10 minutes before getting up and walking back into Hyderabad House. It was all quite unprecedented and a pointer to the new warmth in the India-US relations. Observers believe that this conversation led to the crucial breakthrouh in the impasse over the nuclear deal that has been hanging fire since 2008, when it was signed in Washington.

At their joint interaction with the media, Obama referred to their tea talk and thanked the Indian prime minister for the ‘chai pe charcha’. Modi, the son of a

tea-vendor, had devised this campaign strategy after a rival Congress party leader had ridiculed his tea-seller roots.

New Delhi, Jan 25 (IANS) Talking glowingly about his “good friendship” with US President Barack Obama and how it had brought the people of India and US closer, Prime Minister Narendra Modi addressed him by his first name “Barack” more than once while Obama, in response, was less informal and addressed him as “Modi” or “prime minister”.

“Barack and I have forged a friendship. There is openness when we talk on the phone and we also crack jokes,” Modi said.
“This chemistry has brought Barack closer to me but also brought the people of India and America closer” he added.
“I’m fairly new in this area but relations between countries depends less on full stops, commas, and more on the personal chemistry between the leaders. I think this chemistry is very important and will only grow,” he said further.
Obama too agreed with Modi and said their friendship reflected the “warmth” between the two countries.
“In addition to the personal friendship that we have built in a brief amount of time we are reflecting the warmth between the people of India and US,” Obama said.
“We compared hours of sleep. It turns out that Modi is even getting less sleep than me. That’s because he is still new,” Obama said much to the amusement of the media persons.