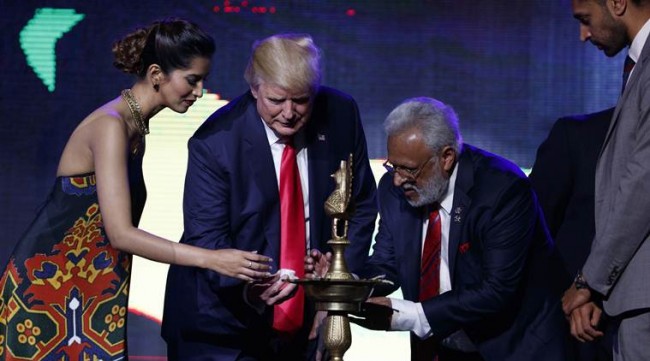 “Because that is what my diaspora community believes in, and that is why we are overwhelmingly going to elect Hillary Clinton as the next President of the United States,” he declared.

Congressman Frank Pallone said Trump would create more divisiveness in New Jersey because of his comments against Muslims and immigrants.

The news conference was organised by South Asians for Hillary.

The New Jersey representative of the group, Amit Jani, said: “We don’t think it’s right for someone from out of the state to come here and raise political issues with our faith and say they speak for over 3.4 million Indian-Americans across the country, even more Muslim-Americans, and the South Asian communities as a whole.”

The protesters, however, were vastly outnumbered by the 8,000 people who came to the Trump rally.

A clutch of protesters gathered in front of a banner announcing the Trump on the route to the venue rally with signs that read, “End Caste apartheid,” “Dump Trump” and “South Asians Against Trump”.

A series of opinion polls by the National Asian American Survey showed that Trump’s support among registered Indian American voters slipped from 11 percent in May to seven percent this month, while his Democratic Party opponent, Hillary Clinton held steady at 71 percent.